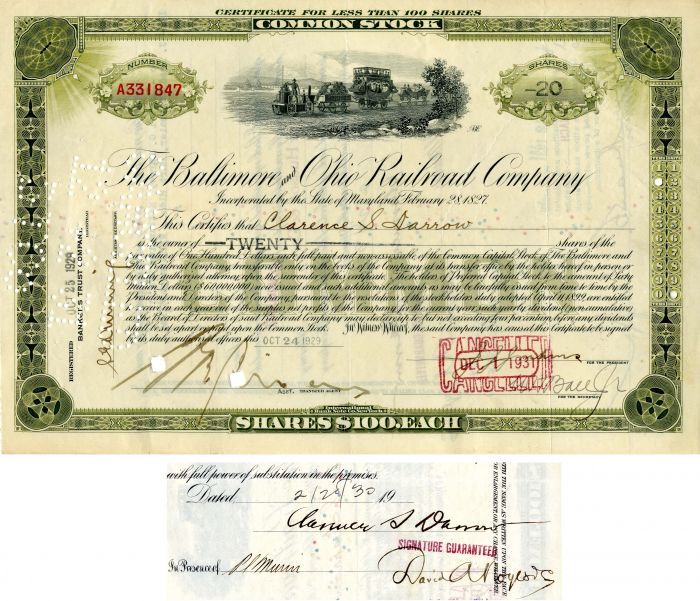 Stock issued to and signed on the back by Clarence S. Darrow. Issued just 5 days before the famed Oct. 29, 1929 Stock Market Crash! Unquestionably the most famous lawyer in american history. Most known for the Scopes Evolution (monkey trial) case! Unique! Only 1 found!

Clarence Seward Darrow (April 18, 1857  March 13, 1938) was an American lawyer and leading member of the American Civil Liberties Union. He was best known for defending teenage thrill killers Leopold and Loeb in their trial for murdering 14-year-old Robert "Bobby" Franks (1924). Some of his other notable cases included defending Ossian Sweet, and John T. Scopes in the Scopes "Monkey" Trial (1925), in which he opposed William Jennings Bryan (statesman, noted orator, and three-time presidential candidate). Called a "sophisticated country lawyer", he remains notable for his wit, which marked him as one of the most famous American lawyers and civil libertarians. Clarence Darrow was born in Kinsman, Ohio, on April 18, 1857. He was the fifth son of Amirus and Emily (Eddy) Darrow. He attended Allegheny College for only one year. Over the summer the Panic of 1873 struck, and Darrow was determined to not be a financial burden to his father any longer. Over the next three years he taught in the winter at the district school in a country community. Clarence attended Allegheny College and the University of Michigan Law School, but did not graduate from either institution. While teaching, Darrow started to study the law on his own, and by the end of his third year of teaching, his family urged him to enter the law department at Ann Arbor. Darrow only studied there a year when he decided that it would be much more cost effective to work and study in an actual law office. When he felt that he was ready, he took the Ohio Bar exam and passed. He was admitted to the Ohio bar in 1878. The Clarence Darrow Octagon House, which was his childhood home in the small town of Kinsman, Ohio, contains a memorial to him. Darrow opened his first little office in Andover, Ohio, a small farming town just ten miles from Kinsman. Having little to no experience, he started off slowly and gradually built up his career by dealing with the everyday complaints and problems of a farming community. After two years Darrow felt he was ready to take on new and different cases and moved his practice to Ashtabula, Ohio, with a population of 5,000 people and the largest city in that part of the country, where he became involved in Democratic Party politics and served as the town counsel. In 1880, he married Jessie Ohl, and eight years later he moved to Chicago with his wife and young son, Paul. He did not have much business when he first moved to Chicago, and spent as little as possible. He Joined the Henry George Club and made some friends and connections in the city. Being part of the club also gave him an opportunity to speak for the Democratic party on the upcoming election. He slowly made a name for himself through these speeches, eventually earning the standing to speak in whatever hall he liked. He was offered work as an attorney for the city of Chicago. He worked in the city law department for two years when he resigned and took a position as a lawyer at the Chicago and North-Western Railway Company. In 1894, Darrow represented Eugene V. Debs, the leader of the American Railway Union, who was prosecuted by the federal government for leading the Pullman Strike of 1894. Darrow severed his ties with the railroad to represent Debs, making a financial sacrifice. He saved Debs in one trial but could not keep the union leader from being jailed in another. Also in 1894, Darrow took on the 1st murder case of his career, defending Patrick Eugene Prendergast, the "mentally deranged drifter" who had confessed to murdering Chicago mayor Carter H. Harrison, Sr. Darrow's "insanity defense" failed and Prendergast was executed that same year. Among 50 defenses in murder cases throughout the whole of Darrow's career, the Prendergast case would prove to be the only one resulting in an execution.