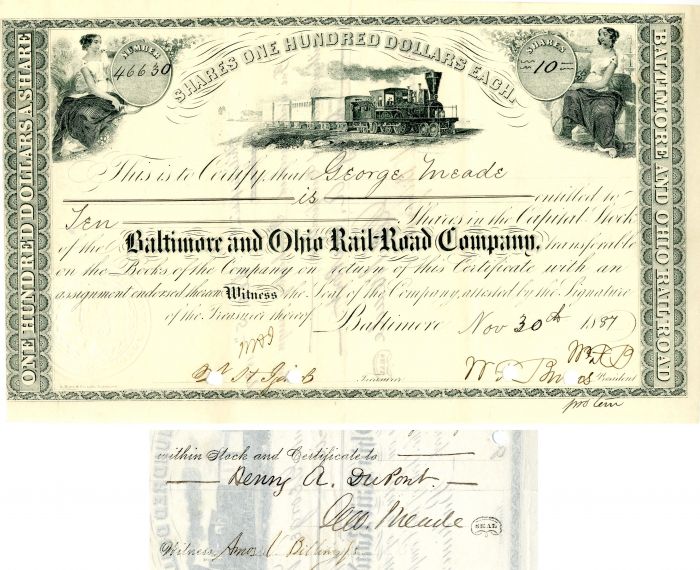 Stock issued to and signed on back by George Meade, son or relative of Gen'l Geo. Meade?

George Gordon Meade (December 31, 1815  November 6, 1872) was a career United States Army officer and civil engineer best known for defeating Confederate General Robert E. Lee at the Battle of Gettysburg in the American Civil War. He previously fought with distinction in the Second Seminole War and the MexicanAmerican War. During the Civil War, he served as a Union general, rising from command of a brigade to that of the Army of the Potomac. Earlier in his career, he was an engineer and was involved in the coastal construction of several lighthouses. Meade's Civil War combat experience started as a brigade commander in the Peninsula Campaign and the Seven Days Battles. He was severely wounded while leading his brigade at the Battle of Glendale. As a division commander, he had notable success at the Battle of South Mountain and assumed temporary corps command at the Battle of Antietam. Meade's division was arguably the most successful of any at the Battle of Fredericksburg in December. It was part of a force charged with driving the Confederate troops under Stonewall Jackson back from their position on Prospect Hill. The division made it further than any other, but was forced to turn back due to a lack of reinforcements. Meade was promoted to commander of the V Corps, which he led during the Battle of Chancellorsville. During the Gettysburg Campaign, he was appointed to command the Army of the Potomac just three days before the Battle of Gettysburg. Arriving on the field after the first day's action on July 1, Meade organized his army on favorable ground to fight an effective defensive battle against Robert E. Lee's Army of Northern Virginia, repelling a series of massive assaults throughout the next two days. Lee was forced to retreat to Virginia, ending his hope of winning the war through a successful invasion of the North. This victory was marred by Meade's ineffective pursuit during the retreat, allowing Lee and his army to escape instead of completely destroying them. The Union Army also failed to follow up on its success during the Bristoe Campaign and Battle of Mine Run that fall, which ended inconclusively. Meade suffered from intense political rivalries within the Army, notably with Daniel Sickles, who tried to discredit his role in the victory at Gettysburg. In 186465, Meade continued to command the Army of the Potomac through the Overland Campaign, the Richmond-Petersburg Campaign, and the Appomattox Campaign, but he was overshadowed by the direct supervision of the general-in-chief, Lt. Gen. Ulysses S. Grant, who accompanied him throughout these campaigns. Grant conducted most of the strategy during these campaigns, leaving Meade with significantly less influence than before. His image was harmed by his notoriously short temper and disdain for the press. After the war, he commanded several important departments during Reconstruction.