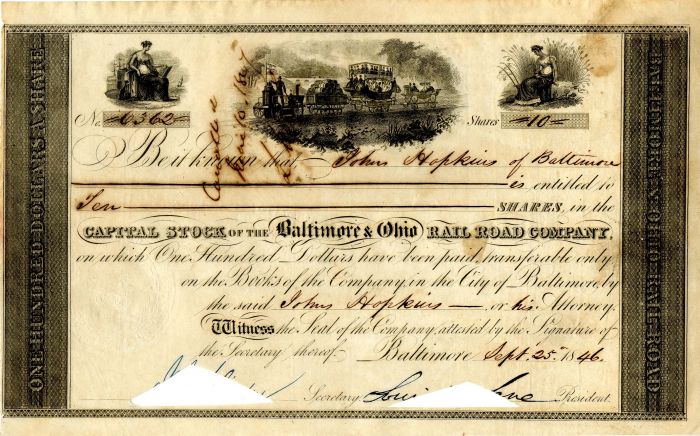 Stock issued to but not signed by Johns Hopkins. Rare! 1 available with light stain for $150.

Johns Hopkins (1795-1873) A wealthy merchant of 19th century Baltimore, most noted for his philanthropic creation of Johns Hopkins University and Johns Hopkins Hospital. Johns whose nickname was "Johnsie" was the second of 11 children in his Quaker family, whose 500-acre tobacco plantation was located in Crofton, incorporated in the 1960s, in Anne Arundel County, Maryland. His unusual first name, often misstated as "John," was the surname of his great-grandmother, Margaret Johns, one of whose children's name was "Johns Hopkins". When his parents, Maryland-born Samuel Hopkins and Virginia-born Hannah Janney, freed their slaves in 1807, Johns and his brother were put to work in the fields, interrupting their formal education. He also helped to care for the younger children. After he left the plantation, Hopkins worked for a time in his uncle's wholesale grocery business, where he fell in love with his cousin Elizabeth. Elizabeth's parents would not allow them to marry, since prejudice against first cousins marrying was strong among Quakers. Hopkins and Benjamin Moore, also a Quaker, went into business together. The business later became Hopkins & Brothers after Moore dissolved the partnership claiming that Johns loved money too much. One writer though calls this statement a "myth" or "fact" which "was so widely reported that the comment calling Hopkins "the only man more interested in making money than I" is variously attributed to his former business partner, a close associate, even international financier George Peabody--anyone, it seems, who had business dealings with the notoriously cheap Mr. Hopkins" After Moore, Hopkins then partnered with his three brothers; Hopkins & Bros sold various wares in the Shenandoah Valley from wagons in exchange for corn whiskey which was then sold in Baltimore as "Hopkins' Best". Later Hopkins invested heavily in the Baltimore and Ohio Railroad, where he made most of his fortune. He twice put up his own money to bail out the railroad in 1857 and 1873. As a Union man during the American Civil War, he was in part responsible for the use of the railroad to support the Union cause, despite Maryland's general sympathies to the Confederacy. One of the first campaigns of the Civil War was also planned at his summer estate, Clifton. He also helped to bail out the city of Baltimore more than once and provided assistance, sometimes unsolicited, that helped youths needing help to start a career or business. He died without heirs in 1873 and left $7 million, mostly in B&O stock, to establish his namesake institutions. This sum was the single largest philanthropic donation ever made to educational institutions up until that time. The bequest was used to found the Johns Hopkins Colored Children Orphan Asylum in 1875, the Johns Hopkins University in 1876, the Johns Hopkins Press in 1878 (the longest continuously operating academic press in America), the Johns Hopkins Hospital and the Johns Hopkins School of Nursing in 1889, and the Johns Hopkins Medical School in 1893. Johns Hopkins' views on the institutions he named in them can be found in the incorporation papers filed in 1867, his instruction letter to the hospital trustees dated March 12, 1873, his will, and its codicils. The original site for Johns Hopkins University was chosen by Hopkins himself to be located at his summer estate, Clifton. This property which is now owned by the city of Baltimore is the site of a golf course and a park named "Clifton Park." The orphan asylum which was described as a place where "nothing was wanting that could benefit science and humanity" at its opening later served as a training school for black female domestic workers, an "orthopedic convalescent" home and school for "colored crippled" children and as an orphanage before it was closed in 1924. It was never reopened. The school of nursing was closed in 1973 and reopened in 1983. Overall, Johns Hopkins was an abolitionist who was a child participant in his parents' emancipation of the family's able-bodied slaves in 1807, who worked with other abolitionists like Myrtilla Miner and Henry Ward Beecher before the Civil War, who supported Abraham Lincoln and the Union during the war, and who was after the war a Reconstruction actor who provided instructions in the abovementioned documents that his philanthropy should be used in ways that were often opposed to the racial practices that were beginning to emerge during the American Reconstruction period,including in the posthumously constructed and founded institutions that would later carry his name.