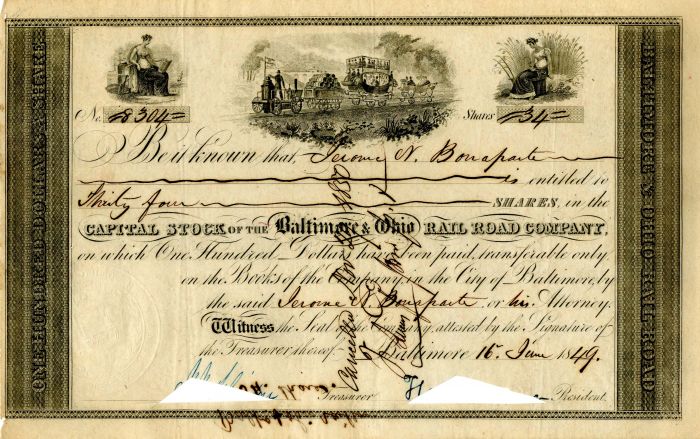 Stock issued to but not signed by Jerome N. Bonaparte.

Jérôme-Napoléon Bonaparte (15 November 1784  24 June 1860) was the youngest brother of Napoleon I and reigned as Jerome I, King of Westphalia, between 1807 and 1813. From 1816 onward, he bore the title of Prince of Montfort. After 1848, when his nephew, Louis Napoleon, became President of the French Second Republic, he served in several official roles, including President of the Senate of France in 1852. Jérôme was born "Girolamo Buonaparte" in Ajaccio, Corsica the eighth and last surviving child, fifth surviving son, of Carlo Buonaparte and Letizia Ramolino. He studied at the Catholic College of Juilly, and then served with the French navy before going to the United States. On Christmas Eve, 24 December 1803, nineteen-year old Jérôme married Elizabeth ("Betsy") Patterson, eighteen-year old daughter of prosperous ship-owner and merchant William Patterson. Napoleon was unable to convince Pope Pius VII in Rome to annul their marriage, and so annulled the marriage himself (by a French imperial decree, 11 March 1805), as a matter of state. Elizabeth was pregnant with a son at the time, (Jerome Napoleon Bonaparte II (1805-1870)), and was on her way to Europe with the elder Jérôme. When they landed in neutral Portugal, Jérôme set off overland to Italy to attempt to convince his brother to recognize the marriage. Elizabeth then attempted to land in Amsterdam, hoping to travel to within the borders of France in order for her and Jerome's baby son to be born on French soil, but Emperor Napoleon I issued orders barring the ship from entering the harbour. Being with child, Elizabeth went on to England where Jerome Napoleon Bonaparte II was born.

Emperor Napoleon instituted Roman Catholic and later French state divorce proceedings only after the birth of the baby, Jerome II. After considerable delay and internal struggle, Elizabeth was later declared divorced from Jerome by a special decree and act of the state legislature, of the General Assembly of Maryland in 1815. Napoleon made his brother King of Westphalia, the short-lived realm (1807-1813), created, by Napoleon, from the several states and principalities in northwestern Germany (in the former thousand-year old Holy Roman Empire). It was later reorganized by Napoleon into the Confederation of the Rhine and then after his defeat, the Allies were to reorganise the German states into a German Confederation with Austrian leadership, largely overriding prior claim of lesser states. The Napoleonic realm of Westphalia had its capital in Kassel (then: Cassel). Jérôme was married, as arranged by Napoleon to HRH Princess Catharina of Württemberg, the daughter of Frederick I, King of Württemberg. A marriage to a German princess intended to boost the dynastic standing of the young French king. As a model state, the Kingdom of Westphalia was expected by Napoleon to serve as an example for the other German states. It received the first constitution and parliament to be found on German soil (decades before other parliaments, legislatures, reichstags, bundesrats, etc. such as in Frankfurt in 1848). Jérôme imported the Empire style from Paris, bestowing the new state with a modern, representative appearance. The small kingdom thus received more attention since the famous "Treaty of Westphalia" which ended the Thirty Years' War a hundred and fifty years earlier in 1648. Thanks to these efforts by King Jerome, Kassel celebrated an enormous cultural upturn.

The Baltimore and Ohio Railroad (reporting marks B&O, BO) was the first common carrier railroad and the oldest railroad in the United States, with its first section opening in 1830. Merchants from the city of Baltimore, which had benefitted to some extent from the construction of the National Road early in the century, wanted to continue to compete for trade with trans-Appalachian settlers with the newly constructed Erie Canal (which served New York City), another canal being proposed by Pennsylvania (which would have connected Philadelphia and Pittsburgh), the Chesapeake and Ohio Canal (which connected to the nation's capital, Washington, D.C., although it never reached Ohio), and the James River Canal, which directed traffic toward Richmond and Norfolk, Virginia. At first the B&O was located entirely in the state of Maryland, its original line extending from the port of Baltimore west to Sandy Hook (opened in 1834). There it connected with Harper's Ferry (the boat) across the Potomac into Virginia, and also with the navigable Shenandoah River.

Because of competition with the C&O canal for trade with coal fields in western Maryland, the railroad could not use the C&O right-of-way. Thus, to continue westward through the Appalachian Mountains, the B&O chose to build the B & O Railroad Potomac River Crossing (1839) at Harpers Ferry, Virginia (since 1863, West Virginia). The line continued through Virginia to a point just west of the junction of Patterson Creek and the North Branch Potomac River, where it crossed back into Maryland to reach Cumberland (1842), connecting with the National Road, the main route west. It reached the Ohio River at Moundsville, Virginia (1852), Wheeling (1853), where it built a terminus, and a few years later (1857) also to Parkersburg, Virginia, below rapids which made navigation difficult during parts of the year. It proved crucial to Union success during the American Civil War, although the conflict also caused considerable damage (and repair costs). After the war's end, the B&O consolidated several feeder lines in Virginia and West Virginia, as well as expanded westward into Ohio (including a junction at Portsmouth), Indiana, and Illinois. B&O advertising later carried the motto: "Linking 13 Great States with the Nation."

After several mergers, the B&O became part of the CSX Transportation (CSX) network. The B&O also includes the Leiper Railroad, the first permanent horse-drawn railroad in the U.S. At the end of 1970, the B&O operated 5,552 miles of road and 10,449 miles of track, not including the Staten Island Rapid Transit (SIRT) or the Reading and its subsidiaries. It includes the oldest operational railroad bridge in the United States.

When CSX established the B&O Railroad Museum as a separate entity from the corporation, it donated some of the former B&O Mount Clare Shops in Baltimore, including the Mt. Clare roundhouse, to the museum, while selling the rest of the property. The B&O Warehouse at the Camden Yards rail junction in Baltimore now dominates the view over the right-field wall at the Baltimore Orioles' current home, Oriole Park at Camden Yards.

Part of the B&O Railroad's immortality has come from being one of the four featured railroads on the U.S. version of the board game Monopoly; it is the only railroad on the board that did not directly serve Atlantic City, New Jersey.