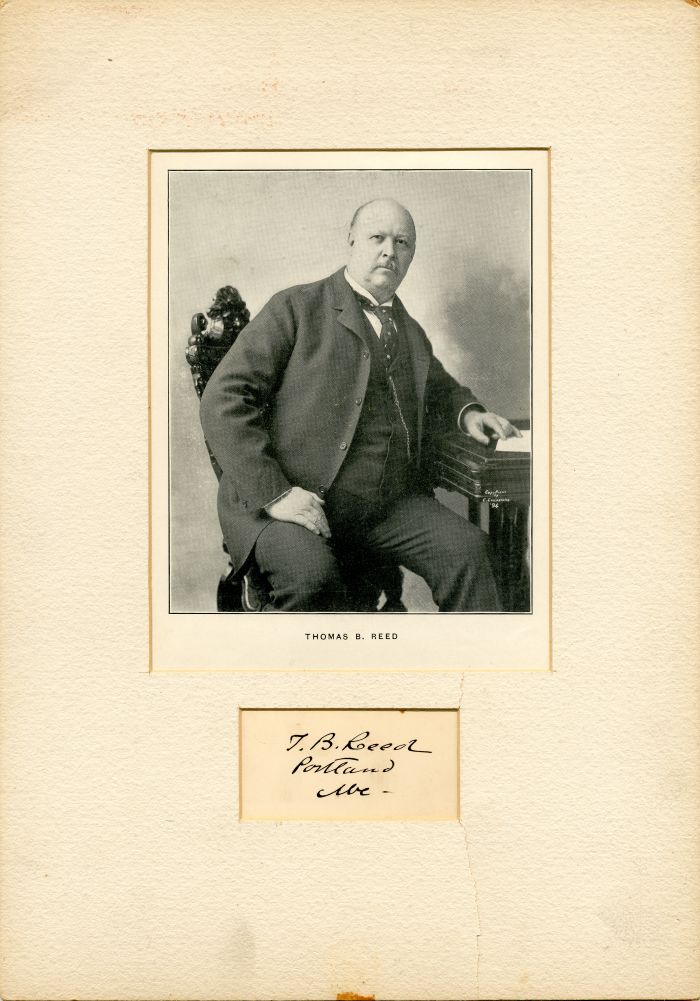 Portrait of Thomas B. Reed and signed T.B. Reed, Portland, Me. Important!

Occasionally ridiculed as "Czar Reed", he had great influence over the agenda and operations of the House, more so than any previous speaker. He increased the Speaker's power by instituting the "Reed Rules," which limited the ability of the minority party to prevent the establishment of a quorum.

Reed helped pass the Lodge Bill, which sought to protect African American voting rights in the Southern United States, but the bill failed to pass in the Senate and never became law. He opposed the SpanishAmerican War and resigned from Congress in 1899.

Reed was born in Portland, Maine on October 18, 1839 to Matilda Prince (Mitchell) and Thomas B. Reed. Reed attended public schools, including Portland High School, before attending Bowdoin College, from which he graduated in 1860.

Afterward, he studied law, and was admitted to the bar in 1865. He was an acting assistant paymaster for the United States Navy during the Civil War, from April 1864 to November 1865. He practiced in Portland and was elected to the Maine House of Representatives in 1868 and 1869. He served in the Maine Senate in 1870 but left to serve as the state's Attorney General from 1870 to 1872. Reed became city solicitor of Portland from 1874 to 1877 before being elected as a Republican to the 45th Congress in 1876. He married Susan P. Merrill, born at Center Harbor, New Hampshire, on Lake Winnipesaukee. Her father, the Rev. Samuel H. Merrill, a well-known Congregational clergyman, was pastor of a church in Center Harbor at the time of her birth. Six years afterwards he returned with his family to his native state, Maine. During the Civil War, Merrill served as chaplain of the First Maine Cavalry, and Susan also had a brother in this famous regiment. Merrill's pastorates, aside from his war experiences, were principally in Maine. Susan Merrill's mother was Hannah Prentis, a native of New Hampshire. Merrill had one brother, Edward P. Merrill, and one sister, who resided in Lowell, Massachusetts. Merrill and Reed were friends in childhood, attending school together in Portland. They married in 1871. Reed was then a member of the Maine Legislature, and the young couple went immediately to Augusta, the state capital. They had one daughter, Katherine.

He was known for his acerbic wit (asked if his party might nominate him for President, he noted, "They could do worse, and they probably will"). His size, standing at over 6 feet in height and weighing over 300 lbs (136 kg), was also a distinguishing factor for him. Reed was a member of the social circle that included intellectuals and politicians Henry Cabot Lodge, Theodore Roosevelt, Henry Adams, John Hay and Mark Twain.

As a House freshman, Reed was appointed to the Potter Commission, which was to investigate voting irregularities in the presidential election of 1876, where his skill at cross examination forced Democrat Samuel J. Tilden to appear in person to defend his reputation. He chaired the Committee on the Judiciary (Forty-seventh Congress) and chaired the Rules Committee (Fifty-first, Fifty-fourth, and Fifty-fifth Congresses). Reed was first elected Speaker after an intense fight with William McKinley of Ohio. Reed gained the support of young Theodore Roosevelt; his influence as the newly appointed Civil Service Commissioner was the decisive factor. Reed served as the Speaker of the United States House of Representatives from 1889 to 1891 and then from 1895 to 1899, as well as being Chairman of the powerful Rules Committee.