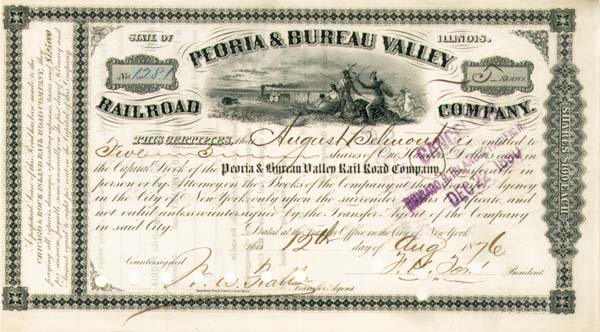 August Belmont (1816-1890), Banker, Born in Prussia. At 14 he secured a position with the Banking House of the Rothschilds at Frankfort and later managed some of the enormous financial transactions of the Rothschilds. At 21, he came to New York. In 1841, he fought a duel over a point of honor, in which he was wounded with the result of being lamed for life. He became a U.S. citizen. In 1854, he was appointed U.S. Charge dAffaires at the Hague. He was involved in other diplomatic posts and in politics. Later established the firm of August Belmont & Co. In the Civil War he aided the Union cause by his influence in European political and financial circles. Stock issued to August Belmont in a beautiful script. (not signed) Dated 1876 to 1883. Includes a nice portrait of Belmont. Attractive stock in Excellent Condition. Rare!