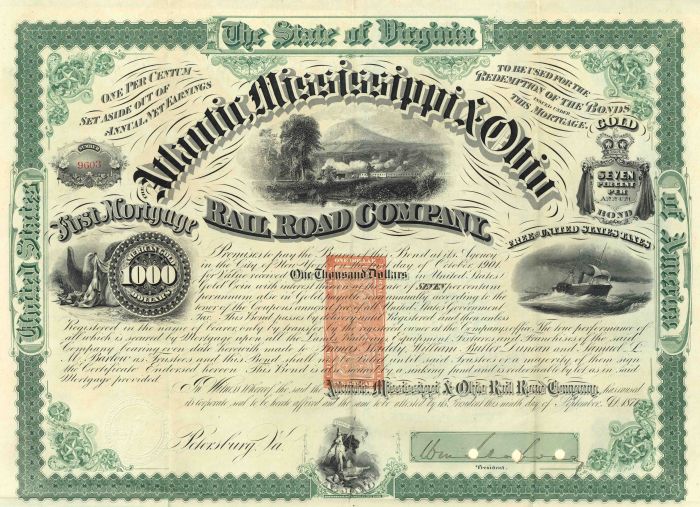 Years: 1871
General William Mahone signed Atlantic, Mississippi, & Ohio Railroad VA $1,000 Gold Bond dated 1871, orange imprinted Internal Revenue stamp at center, several rows of interest bearing coupons each with an engraving of a steam locomotive. General Mahone was a Railroad President, Confederate General, and a Senator from Virginia. General Robert E. Lee said after the war that among the younger men he thought William Mahone had developed the highest quality for organization and command. In railroads after the war, Mahone created the privately owned Atlantic, Mississippi & Ohio Railroad. Of this fine road (later the Norfolk & Western) he was President at a salary (men noted) as big as the Presidents. The very finest graphics by Continental Bank Note Co. In the top 10 most beautiful American Bonds Ever!!! A great addition to any Southern or Confederate collection. Mahones signature is hole cancelled but reasonably clear. Exceptional Color and Graphics! Excellent Condition.