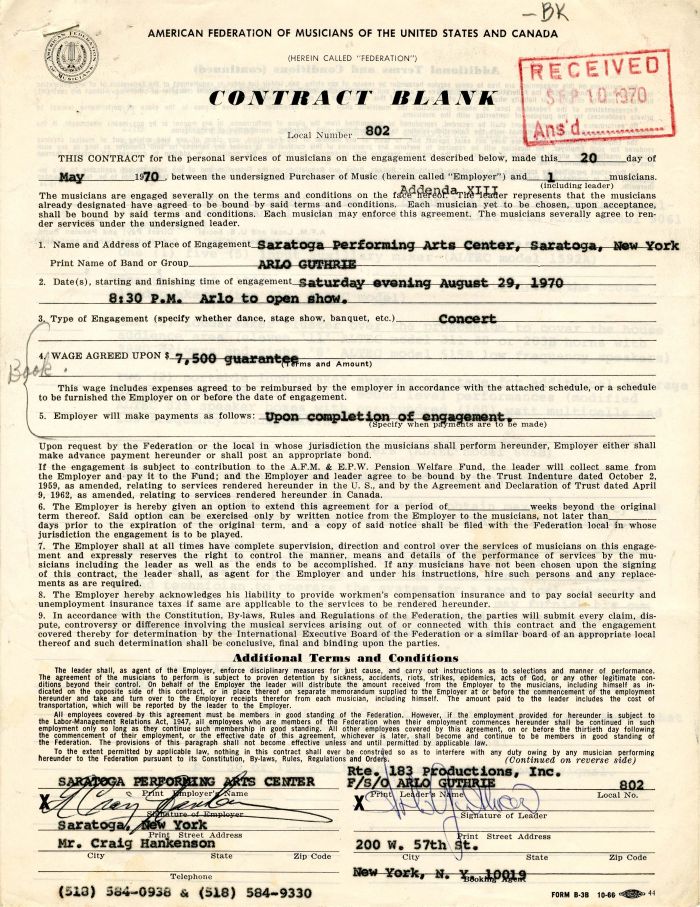 Contract of the American Federation of Musicians of the United States and Canada signed by Arlo Guthrie.

Arlo Davy Guthrie (born July 10, 1947) is a retired American folk singer-songwriter. He is known for singing songs of protest against social injustice, and storytelling while performing songs, following the tradition of his father Woody Guthrie. Guthrie's best-known work is his debut piece, "Alice's Restaurant Massacree", a satirical talking blues song about 18 minutes in length that has since become a Thanksgiving anthem. His only top-40 hit was a cover of Steve Goodman's "City of New Orleans". His song "Massachusetts" was named the official folk song of the state in which he has lived most of his adult life. Guthrie has also made several acting appearances. He is the father of four children, who have also had careers as musicians.

On November 26, 1965, while in Stockbridge, Massachusetts, during Thanksgiving break from his brief stint in college, 18-year-old Guthrie and his friend, Richard Robbins, were arrested for illegally dumping on private property what Guthrie described as "a half-ton of garbage" from the home of his friends, teachers Ray and Alice Brock, after he discovered the local landfill was closed for the holiday. Guthrie and Robbins appeared in court, pled guilty to the charges, were levied a nominal fine and picked up the garbage that weekend.

This littering charge would soon serve as the basis for Guthrie's most famous work, "Alice's Restaurant Massacree", a talking blues song that lasts 18 minutes and 34 seconds in its original recorded version. In 1997, Guthrie pointed out that this was also the exact length of one of the infamous gaps in Richard Nixon's Watergate tapes, and that Nixon owned a copy of the record. The Alice in the song is Alice Brock, who had been a librarian at Arlo's boarding school in the town before opening her restaurant. She later opened an art studio in Provincetown, Massachusetts.

The song lampoons the Vietnam War draft. However, Guthrie has stated in multiple interviews that the song is more an "anti-stupidity" song than an anti-war song, adding that it is based on a true incident. In the song, Guthrie is called up for a draft examination and rejected as unfit for military service as a result of a criminal record consisting solely of one conviction for the aforementioned littering. Alice and her restaurant are the subjects of the refrain, but are generally mentioned only incidentally in the story (early drafts of the song explained that the restaurant was a place to hide from the police). Though her presence is implied at certain points in the story, Alice herself is described explicitly in the tale only briefly when she bails Guthrie and a friend out of jail. On the DVD commentary for the 1969 movie, Guthrie stated that the events presented in the song all actually happened (others, such as the arresting officer, William Obanhein, disputed some of the song's details, but generally verified the truth of the overall story).

"Alice's Restaurant" was the song that earned Guthrie his first recording contract, after counterculture radio host Bob Fass began playing a tape recording of one of Guthrie's live performances of the song repeatedly one night in 1967. A performance at the Newport Folk Festival on July 17, 1967, was also very well received. Soon afterward, Guthrie recorded the song in front of a studio audience in New York City and released it as side one of the album, Alice's Restaurant. By the end of the decade, Guthrie had gone from playing coffee houses and small venues to playing massive and prestigious venues such as Carnegie Hall and the Woodstock Festival.

For a short period after its release in October 1967, "Alice's Restaurant" was heavily played on U.S. college and counterculture radio stations. It became a symbol of the late 1960s, and for many it defined an attitude and lifestyle that were lived out across the country in the ensuing years. Its leisurely finger-picking acoustic guitar and rambling lyrics were widely memorized and played by irreverent youth. Many stations in the United States have a Thanksgiving Day tradition of playing "Alice's Restaurant".

A 1969 film, directed and co-written by Arthur Penn, was based on the true story told in the song, but with the addition of a large number of fictional scenes. This film, also called Alice's Restaurant, featured Guthrie and several other figures in the song portraying themselves. The part of his father Woody Guthrie, who had died in 1967, was played by actor Joseph Boley; Alice, who made a cameo appearance as an extra, was also recast, with actress Pat Quinn in the title role (Alice Brock later disowned the film's portrayal of her).

Despite its popularity, the song "Alice's Restaurant Massacree" is not always featured on the setlist of any given Guthrie performance. Since putting it back into his setlist in 1984, he has performed the song every ten years, stating in a 2014 interview that the Vietnam War had ended by the 1970s and that everyone who was attending his concerts had likely already heard the song anyway. So, after a brief period in the late 1960s and early 1970s when he replaced the monologue with a fictional one involving "multicolored rainbow roaches", he decided to do it only on special occasions from that point forward.

Condition: Excellent
Item ordered may not be exact piece shown. All original and authentic.
OUT OF STOCK
Request re-stock notice?
Email this to a friend
Request Info
Previous Item (Sketch signed by Paul Jones)    (Autographed Letter signed by Eugene duPont) Next Item