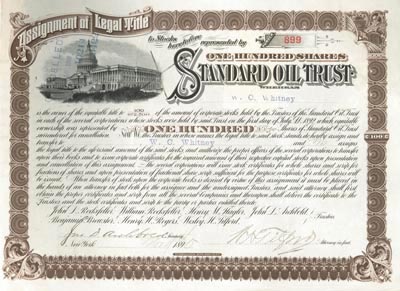 John Dustin Archbold (July 26, 1848 in Leesburg, Ohio  December 6, 1916 in Tarrytown, New York) was an American capitalist and one of the United States' earliest oil refiners. His small oil company was bought out by John D Rockefeller's Standard Oil Company. Archbold rose rapidly at Standard Oil, handling many of the complex secret negotiations over the years. By 1882 he was Rockefeller's closest associate, and typically acted as the company's primary spokesman. Rockefeller after 1896 left business matters to Archbold while he pursued his philanthropy; as vice president Archbold effectively ran Standard Oil until his death in 1916. Inspired by Rockefeller's policies, Archbold's main goals were stabilization, efficiency, and minimizing waste in refining and distributing petroleum products. The company was broken up by the Supreme Court in 1911 into three dozen smaller operations, Archbold became president of the largest one, Standard Oil of New Jersey. Archbold was born to Methodist minister Reverend Israel Archbold and Frances Foster Dana (Archbold) in Leesburg, Ohio. After being educated in public schools, he moved to Pennsylvania by 1864. On February 20, 1870 Archbold married Annie Eliza Mills, "daughter of Samuel Myers Mills of Titusville and Lavinia Jenkins. The couple had four children:  Mary Lavina Archbold (b 1871)  Anne Mills Archbold (b 1873), mother of John Dana Archbold  Frances Dana Archbold (b 1875)  John Foster Archbold (b 1877-1930), father of zoologist Richard Archbold In 1885, Archbold purchased a large mansion in Tarrytown, New York. The estate, called Cedar Cliff, was located at 279 S. Broadway just across from the Carmelite Transfiguration Church. In 1864 Archbold went to the north-west Pennsylvania oil fields and spent 11 years in the oil industry there. When John D. Rockefeller's Standard Oil Company began buying up refiners in this oil-rich region, many independent refiners felt squeezed out, and Archbold was among Standard's harshest and loudest critics. In 1885 after becoming skeptical of reports of oil discoveries in Oklahoma, he sold-out at a loss, saying Ill drink every gallon produced west of the Mississippi! Archbold was subsequently recruited by Rockefeller to Standard Oil, where he became a director and served as its vice-president and president until its dissolution in 1911.

In 1911-1916 Archbold was president of the Standard Oil Company of New Jersey. In 1886 Archbold became a member of the board of trustees of Syracuse University, and was the boards president from 1893 until his death in 1916. From 1893 to 1914, he contributed nearly $6,000,000 for eight buildings, including the full cost of Archbold Stadium (opened 1907, demolished 1978; the Carrier Dome was built on this site), Sims Hall (men's dormitory, 1907), Archbold Gymnasium (1908, nearly destroyed by fire in 1947, but still in use), and the oval athletic field. Archbold was involved in a scandalous affair involving monetary gifts to the Republican Party. In 1912 he was called to testify before a committee which was investigating political contributions made by the Standard Oil Company to the campaign funds of political parties. He claimed that President Theodore Roosevelt was aware of the $125,000 contribution made by Standard Oil Company to the 1904 campaign fund of the Republican Party, but President Roosevelt produced letters written by him which directed his campaign managers to return such monetary contributions if they were offered. Archbold died of complications from appendicitis in Tarrytown, New York on December 6, 1916. He is buried in Sleepy Hollow Cemetery in Sleepy Hollow, New York. -In 1914, the "John Dustin Archbold College of Liberal Arts" at Syracuse University was renamed in his honor. The entrance to the university's Hall of Languages remains inscribed with this name. -The John D. Archbold Memorial Hospital, now the Archbold Medical Center, in Thomasville, Georgia, was established in 1925, through a donation by his son, John Foster Archbold. -His grandson, John Dana Archbold, was a member of the Board of Trustees of Syracuse University from 1976 to 1993. -The John Dana Archbold Theatre at Syracuse Stage (Central New York's only professional theater) is named after his grandson.

Wesley Hunt Tilford was born in Lexington, Kentucky, on July 14, 1850. His boyhood was spent there. His father, John B. Tilford, had long been a banker in Lexington, but at the close of the sixties, he pulled up stakes, and came to New York, where he once more took up the banking business. Young Wesley went to Columbia College where he studied for a couple of years, but the call of business was too strong to allow him to wait for his bachelor's degree. His elder brother, John B. Tilford, Jr., had entered the fleld of oil, associating himself with Jabez A. Bostwick in the firm of Bostwick & Tilford. Attracted by the prospects of petroleum, Wesley gave up his college course, and entered as a clerk in the firm of his brother, then doing business in Pearl Street. When the firm dissolved the two brothers joined in a partnership of their own under the title of John B. Tilford Jr. & Co., which did well from the start and continued to prosper until, at the period of the Eastern oil amalgamations, a substantial offer from the Standard Oil Company induced them to cast their fortunes with that vigorous organization. As has been said, those were busy formative times in the oil business, and the new recruit proved his mettle by the splendid success of his visit to the Pacific slope in 1878. He there organized the oil trade in California, Oregon, Colorado and the surrounding States. On his return to the East he was welcomed to a high place in the home office, taking charge of the vast transportation problem with vigor and effectiveness. And so, strong in the esteem and confidence of all his co-workers, he continued to the end. He was a member of the New York Chamber of Commerce and belonged to the Metropolitan and Tuxedo Clubs.

Tilford, one of the Vice Presidents of the Standard Oil Company, left behind him a notable record of over thirty years in the service of the Company and of some years before that in a petroleum business with which his family was connected. ln his time he had passed through all grades of the merchandising of petroleum, filling post after post with loyalty, credit and acumen. For nine years before his elevation to the Vice Presidency in 1908, he had filled the office of Treasurer of the Standard Oil Company, and from 1892 onward he had been a Director. Despite this long and prominent career, few outside the oil business knew him, so unobtrusive was he by nature. He was a man of few words but of great grasp of affairs, particularly strong in organizing qualities, and gifted with fine and accurate judgment. ln addition he was a man of wide information and varied reading. He was courtly, kind-hearted and charitable. The great good fortune of the Standard Oil Company was the securing of the service of such a man. Ordinary qualities sharpened by business experience may carry a man safely through the details of an established business easily filling its place in the commercial economy; but to win and retain a leading place in a business ever growing, ever reaching out, ever conquering new worlds and gaining and holding new markets, called for qualities far beyond the ordinary, and it is the testimony of his associates that he always deserved his promotions. This is high praise from men themselves the peers of the giants of business in all ages and all climes.