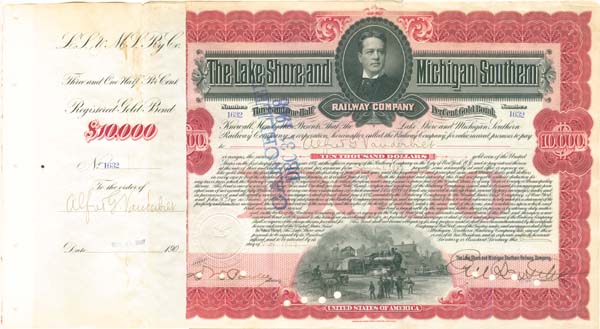 Alfred G. Vanderbilt (1877-1915), Sportsman, died in the sinking of the Lusitania. Among Alfred's many holdings, were positions in the New York Central RR, Beech Creek RR, Lake Shore and Michigan Southern Rwy, Michigan Central RR and Pittsburgh and Lake Erie RR as well as the Pullman Company. The Lake Shore and Michigan Southern Rwy, sometimes referred to as the Lake Shore, was a major part of the New York Central Railroad's Water Level Route from Buffalo, NY to Chicago, IL. The line is still a major corridor and hosts Amtrak passenger trains. This high denomination $10,000 bond dated 1907 is issued to and signed at the back by Alfred. Includes an especially nice portrait of Alfred. Very Rare!