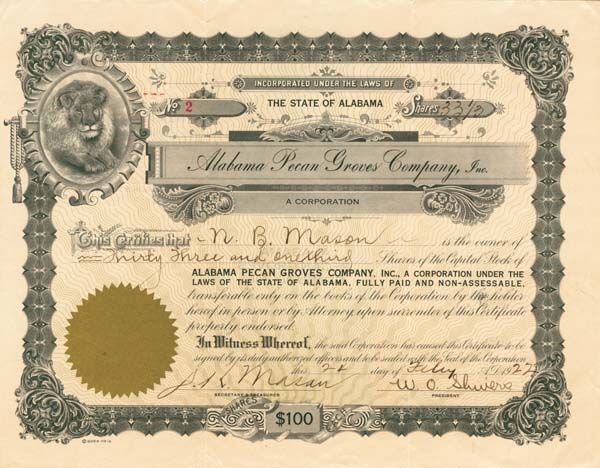 The pecan (Carya illinoinensis) is a species of hickory native to the southern United States and northern Mexico in the region of the Mississippi River. The tree is cultivated for its seed in the southern United States, primarily in Georgia, New Mexico, and Texas, and in Mexico, which produces nearly half of the world total. The seed is an edible nut used as a snack and in various recipes, such as praline candy and pecan pie. The pecan, in various aspects, is included in state symbols of Alabama, Arkansas, California, Oklahoma, and Texas.

"Pecan" is from an Algonquin word variously referring to pecans, walnuts, and hickory nuts. There are many variant pronunciations, some regional and others not. The most common American pronunciation is /pɪˈkɑːn/. There is little agreement in the United States, even regionally, as to the "correct" pronunciation.

A pecan, like the fruit of all other members of the hickory genus, is not truly a nut, but is technically a drupe, a fruit with a single stone or pit, surrounded by a husk. The husks are produced from the exocarp tissue of the flower, while the part known as the nut develops from the endocarp and contains the seed. The husk itself is aeneous, that is, brassy greenish-gold in color, oval to oblong in shape, 2.66 cm (12+3⁄8 in) long and 1.53 cm (5⁄81+1⁄8 in) broad. The outer husk is 34 mm (1⁄85⁄32 in) thick, starts out green and turns brown at maturity, at which time it splits off in four sections to release the thin-shelled seed.

Pecans were one of the most recently domesticated major crops. Although wild pecans were well known among native and colonial Americans as a delicacy, the commercial growing of pecans in the United States did not begin until the 1880s. As of 2014, the United States produced an annual crop of 119.8 million kilograms (264.2 million pounds), with 75% of the total crop produced in Georgia, New Mexico and Texas. They can be grown from USDA hardiness zones approximately 5 to 9, and grow best where summers are long, hot and humid. The nut harvest for growers is typically around mid-October. Outside the United States, Mexico produces nearly half of the world total, similar in volume to the United States, together accounting for 93% of global production. Generally, two or more trees of different cultivars must be present to pollinate each other.

Choosing cultivars can be a complex practice, based on the Alternate Bearing Index (ABI) and their period of pollinating. Commercial growers are most concerned with the ABI, which describes a cultivar's likelihood to bear on alternating years (index of 1.0 signifies highest likelihood of bearing little to nothing every other year). The period of pollination groups all cultivars into two families: those that shed pollen before they can receive pollen (protandrous), and those that shed pollen after becoming receptive to pollen (protogynous). State level resources provide recommended varieties for specific regions.

Native pecans in Mexico are adapted from zone 9 to zone 11. Little or no breeding work has been done with these populations. A few selections from native stands have been made such as Frutosa and Norteña which are recommended for cultivation in Mexico. Improved varieties recommended for cultivation in Mexico are USDA developed cultivars. This represents a gap in breeding development given that native pecans can be cultivated at least down to the Yucatán peninsula while the USDA cultivars have chilling hour requirements greater than those occuring in much of the region. Some regions of the U.S. such as parts of Florida and Puerto Rico are zone 10 or higher, and these regions have limited options for pecan cultivation. 'Western' is the only commonly available variety that can make a crop in low chill zones.

Active breeding and selection is carried out by the USDA Agricultural Research Service with growing locations at Brownwood and College Station, Texas. University of Georgia has a breeding program at the Tifton campus working to select pecan varieties adapted to subtropical southeastern U.S. growing conditions.

While selection work has been done since the late 19th century, most acreage of pecans grown today is of older cultivars, such as 'Stuart', 'Schley', 'Elliott', and 'Desirable', with known flaws but also with known production potential. Cultivars, such as 'Elliot', are increasing in popularity due to resistance to Pecan scab. The long cycle time for pecan trees plus financial considerations dictate that new varieties go through an extensive vetting process before being widely planted. Numerous varieties produce well in Texas, but fail in the Southeastern U.S. due to increased disease pressure. Selection programs are ongoing at the state level, with Alabama, Arkansas, Florida, Georgia, Kansas, Missouri, New Mexico, and others having trial plantings.

Varieties adapted from the southern tier of states north through some parts of Iowa and even into southern Canada are available from nurseries. Production potential drops significantly when planted further north than Tennessee. Most breeding efforts for northern-adapted varieties have not been on a large enough scale to significantly affect production. Varieties that are available and adapted (e.g., 'Major', 'Martzahn', 'Witte', 'Greenriver', 'Mullahy', and 'Posey') in zones 6 and farther north are almost entirely selections from wild stands. Kanza, a northern-adapted release from the USDA breeding program, is a grafted pecan having high productivity and quality, and cold tolerance.

Pecans are subject to a wide range of diseases, pests, and physiological disorders that can limit tree growth and fruit production. These range from scab to hickory shuckworm to shuck decline.

Pecans are prone to infection by bacteria and fungi such as Pecan scab, especially in humid conditions. Scab is currently the most destructive disease affecting pecan trees untreated with fungicides. Recommendations for preventive spray materials and schedules are available from state level resources.

In the Southeastern United States, nickel deficiency in C. illinoinensis produces a disorder called "mouse-ear" in trees fertilized with urea. Similarly, zinc deficiency causes rosetting of the leaves. Various other disorders are documented, including canker disease and shuck decline complex.

The seeds of the pecan are edible, with a rich, buttery flavor. They can be eaten fresh or used in cooking, particularly in sweet desserts, such as pecan pie, a traditional Southern U.S. dish. Butter pecan is also a common flavor in cookies, cakes, and ice creams. Pecans are a major ingredient in American praline candy. Other applications of cooking with pecans include pecan oil and pecan butter.

Pecan wood is used in making furniture and wood flooring, as well as a flavoring fuel for smoking meats, giving grilled foods a sweet and nutty flavor stronger than many fruit woods.

The pecan, Carya illinoinensis, is a member of the Juglandaceae family. Juglandaceae are represented worldwide by between seven and 10 extant genera and more than 60 species. Most of these species are concentrated in the Northern Hemisphere of the New World, but some can be found on every continent except for Antarctica. The first fossil examples of the family appear during the Cretaceous. Differentiation between the subfamilies of Engelhardioideae and Juglandioideae occurred during the early Paleogene, about 64 million years ago. Extant examples of Engelhardioideae are generally tropical and evergreen, while those of Juglandioideae are deciduous and found in more temperate zones. The second major step in the development of pecan was a change from wind-dispersed fruits to animal dispersion. This dispersal strategy coincides with the development of a husk around the fruit and a drastic change in the relative concentrations of fatty acids. The ratio of oleic to linoleic acids are inverted between wind- and animal-dispersed seeds. Further differentiation from other species of Juglandaceae occurred about 44 million years ago during the Eocene. The fruits of the pecan genus Carya differ from those of the walnut genus Juglans only in the formation of the husk of the fruit. The husks of walnuts develop from the bracts, bracteoles, and sepals, or sepals only. The husks of pecans develop from the bracts and the bracteoles only.

Before European settlement, pecans were widely consumed and traded by Native Americans. As a wild forage, the fruit of the previous growing season is commonly still edible when found on the ground.

Pecans first became known to Europeans in the 16th century. The first Europeans to come into contact with pecans were Spanish explorers in what is now Louisiana, Texas, and Mexico. These Spanish explorers called the pecan, nuez de la arruga, which roughly translates to "wrinkle nut". Because of their familiarity with the genus Juglans, these early explorers referred to the nuts as nogales and nueces, the Spanish terms for "walnut trees" and "fruit of the walnut". They noted the particularly thin shell and acorn-like shape of the fruit, indicating they were indeed referring to pecans. The Spaniards took the pecan into Europe, Asia, and Africa beginning in the 16th century. In 1792, William Bartram reported in his botanical book, Travels, a nut tree, Juglans exalata that some botanists today argue was the American pecan tree, but others argue was hickory, Carya ovata. Pecan trees are native to the United States, and writing about the pecan tree goes back to the nation's founders. Thomas Jefferson planted pecan trees, C. illinoinensis (Illinois nuts), in his nut orchard at his home, Monticello, in Virginia. George Washington reported in his journal that Thomas Jefferson gave him "Illinois nuts", pecans, which Washington then grew at Mount Vernon, his Virginia home.

Commercial production of pecans was slow because trees are slow to mature and bear fruit. More importantly, the trees grown from nuts of one tree have very diverse characters. To speed nut production and retain the best tree characteristics, grafting from mature productive trees was the obvious strategy. However, this proved technically difficult. The Centennial cultivar was the first to be successfully grafted. This was accomplished by an enslaved person called Antoine in 1846 or 1847, who was owned by Jacques Telesphore Roman of the Oak Alley Plantation near the Mississippi river. The scions were supplied by Dr. A. E. Colomb who had unsuccessfully attempted to graft them himself.

In 1919, the 36th Texas Legislature made the pecan tree the state tree of Texas; in 2001, the pecan was declared the state's official "health nut", and in 2013, pecan pie was made the state's official pie. The town of San Saba, Texas claims to be "The Pecan Capital of the World" and is the site of the "Mother Tree" (c. 1850) considered to be the source of the state's production through its progeny. Alabama named the pecan the official state nut in 1982. Arkansas adopted it as the official nut in 2009. California adopted it, along with the almond, pistachio, and walnut, as one of four state nuts in 2017. In 1988, Oklahoma enacted an official state meal which included pecan pie.