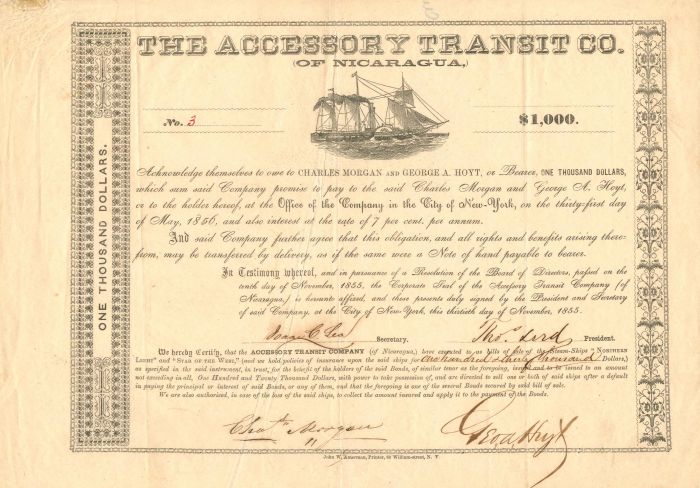 Years: 1855
Chas. Morgan signed $1,000 Bond. So Important and historic! Though not signed by Commodore Vanderbilt, this piece is very important as it is signed by Morgan. Charles Morgan (1795-1878), once named the largest ship-owner in the U.S., was entirely self educated. Son of a Welsh immigrant, Morgan moved to New York City. By age 21, he had started his own business selling provisions to ships. Shortly after, this entrepreneurs innate business sense helped him to become involved with sailing vessels to the West Indies. From this point, Morgans empire grew, including lines of mail steamers (The Morgan Line) connecting New York with Texas. During the 1850s, Morgan became involved with Vanderbilts Nicaragua Transit on the Atlantic, for which he was an agent in New York and later became president in 1853, after Vanderbilt went to Europe. During Vanderbilts absence, Morgan and C.K. Garrison manipulated stock prices, causing Vanderbilt to lose a great deal while they continued to earn money. Morgan and Garrison attempted to gain control of the Nicaraguan government and obtain rights of the Transit. Allegedly, Vanderbilt did not pursue litigation against the two men because the law takes too long and is reported to have said, I will ruin you. Vanderbilt was successful in closing the Transit, with the help of Sylvanus Spencer and Costa Rican troops, who traveled to Nicaragua and applied pressure. Fortunately for Morgan, the closing of the Nicaragua Transit did not ruin his finances. Of course, this companies claim to fame was to facilitate delivery of goods and passengers to the gold fields of California. Ships would unload on the Atlantic side, delivery by land through Nicaragua to the Pacific side and then continue by ship to California. Later, the Civil War provided Morgan with increased business from the U.S. government; he chartered and sold a multitude of his steamers during this time. This Rare Autographed Bond is signed by Charles Morgan and his associates. We had occasion (20 years ago) to visit a stock and bond dealer in Switzerland. He showed us a similar bond signed by Commodore Vanderbilt. What a thrilling piece and likely worth $20,000 or so at present! Since then, weve never seen an example of this historic bond. The bond is Certificate #3 and dated 1855. A very important part of the history of shipping and the Gold Rush. Rare and Excellent Condition.
Condition: Excellent

Item ordered may not be exact piece shown. All original and authentic.
Email this to a friend
Request Info
Previous Item (Baltimore Steam Packet Company - $1,000 - Bond)    (Accessory Transit Co. of Nicaragua) Next Item