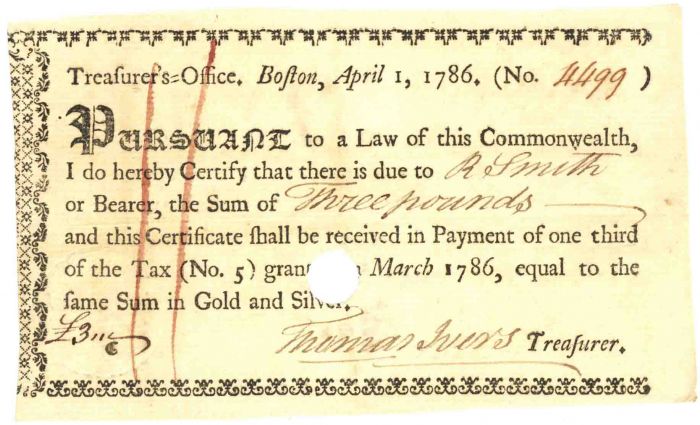 The Treasurer and Receiver-General of Massachusetts (commonly called the "treasurer") is an executive officer, elected statewide every four years.

There were three general types of money in the Colonies of British America: the specie (coins), printed paper money and trade-based commodity money. Commodity money was used when cash (coins and paper money) were scarce. Commodities such as tobacco, beaver skins, and wampum, served as money at various times in many locations.

Cash in the Colonies was denominated in pounds, shillings, and pence. The value of each denomination varied from Colony to Colony; a Massachusetts pound, for example, was not equivalent to a Pennsylvania pound. All colonial pounds were of less value than the British pound sterling. The coins in circulation during the Colonial Era were, most often, of Spanish and Portuguese origin. The prevalence of the Spanish dollar throughout the Colonies, led to the money of the United States being denominated in dollars, rather than pounds.

One by one, colonies began to issue their own paper money to serve as a convenient medium of exchange. In 1690, the Province of Massachusetts Bay created "the first authorized paper money issued by any government in the Western World". This paper money was issued to pay for a military expedition during King William's War. Other colonies followed the example of Massachusetts Bay by issuing their own paper currency in subsequent military conflicts.

The paper bills issued by the colonies were known as "bills of credit". Bills of credit were usually fiat money: they could not be exchanged for a fixed amount of gold or silver coins upon demand. Bills of credit were usually issued by colonial governments to pay debts. The governments would then retire the currency by accepting the bills for payment of taxes. When colonial governments issued too many bills of credit or failed to tax them out of circulation, inflation resulted. This happened especially in New England and the southern colonies, which, unlike the Middle Colonies, were frequently at war. Pennsylvania, however, was responsible in not issuing too much currency and it remains a prime example in history as a successful government-managed monetary system. Pennsylvania's paper currency, secured by land, was said to have generally maintained its value against gold from 1723 until the Revolution broke out in 1775.

This depreciation of colonial currency was harmful to creditors in Great Britain when colonists paid their debts with money that had lost value. The British Parliament passed several Currency Acts to regulate the paper money issued by the colonies. The Act of 1751 restricted the issue of paper money in New England. It allowed the existing bills to be used as legal tender for public debts (i.e. paying taxes), but disallowed their use for private debts (e.g. for paying merchants). In 1776, British economist Adam Smith criticized colonial bills of credit in his most famous work, The Wealth of Nations.

Another Currency Act, in 1764, extended the restrictions to the colonies south of New England. Unlike the earlier act, this act did not prohibit the colonies in question from issuing paper money but it forbade them to designate their currency as legal tender for public or private debts. That prohibition created tension between the colonies and the mother country and has sometimes been seen as a contributing factor in the coming of the American Revolution. After much lobbying, Parliament amended the act in 1773, permitting the colonies to issue paper currency as legal tender for public debts. Shortly thereafter, some colonies once again began issuing paper money. When the American Revolutionary War began in 1775, all of the rebel colonies, soon to be independent states, issued paper money to pay for military expenses.