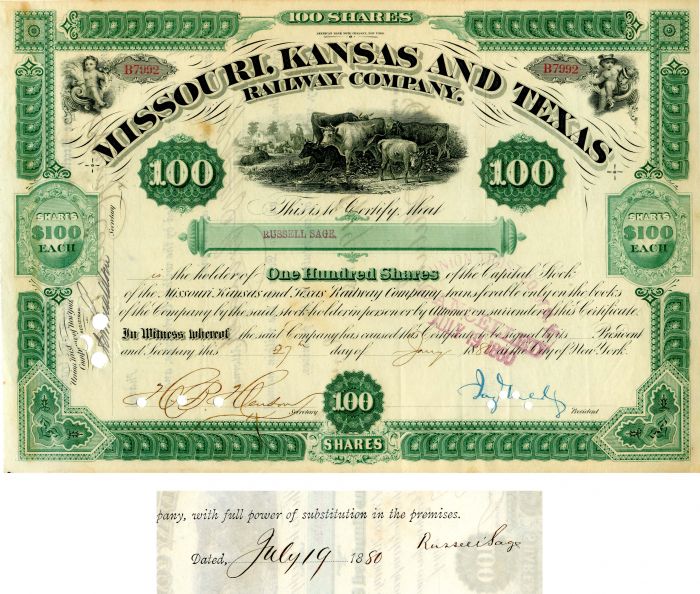 Stock issued to Russell Sage and signed by Jay Gould on the front and Sage on the back. Rare combination! Great signature! Portraits and biographies included.

Jay Gould (1836-1892) Railroad magnate; Financier; Stock market manipulator. Gould began his rise by gaining control of a small Vermont railroad in 1860 at the age of 24. Over the next 10-15 years he made a fortune by buying and selling railroads and manipulating their stock. His most famous railroad battle came in the late 1860s when, along with Jim Fisk and Daniel Drew, he struggled for control of the Erie Railroad against "Commodore" Vanderbilt. Gould went on to become "the most hated man in America" when his attempt to corner the gold market caused a panic termed "Black Friday" in September 1869. Turning towards western railroads in the 1870s, he came to own or control numerous roads, including the Union Pacific and Kansas Pacific. It is estimated that he controlled about 10% of the railroad track in the U.S. by 1880. He went on to gain control of the Western Union Telegraph Company, and the New York elevated railroad. At his death, his fortune was estimated to be $72 million.