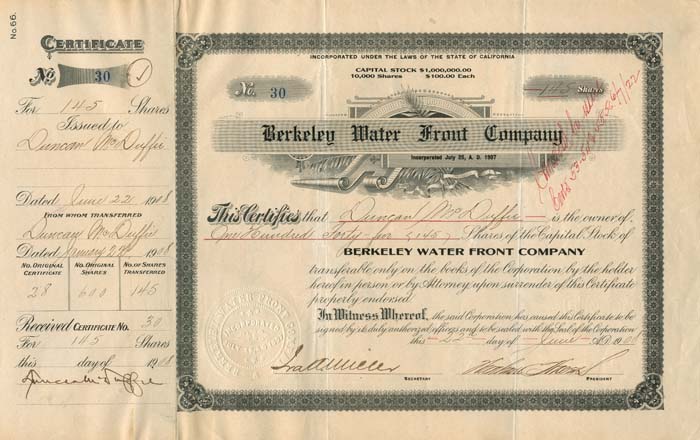 Years: 1908
Stock issued to and signed on stub and verso by Duncan McDuffie (1877-1951). Real estate developer and conservationist in California.
Duncan McDuffie is best known for developing the Claremont and Northbrae neighborhoods of Berkeley as well as St. Francis Wood in San Francisco. In addition to his business ventures, McDuffie was also a conservationist who served as the president of the Sierra Club. In addition, he won the Pugsley medal for his service on the California State Parks Commission, in which capacity he helped establish the California state park system.

The Berkeley Waterfront Company, operating in the interests of the Santa Fe, bought up large portions of the Albany, Berkeley, and Emeryville shorelines in the 1890's. These lands remained largely undeveloped until the Golden Gate Turf Club built a racetrack on land leased from the Santa Fe in the late 1940's. SOLD
Condition: Excellent
Item ordered may not be exact piece shown. All original and authentic.
OUT OF STOCK
Request re-stock notice?
Email this to a friend
Request Info
Previous Item (Belleville and Southern Illinois Railroad Company issued to Samuel J. Tilden)    (Bernard Baruch - Burlington Cedar Rapids and Northern Railway - Stock Certificate) Next Item