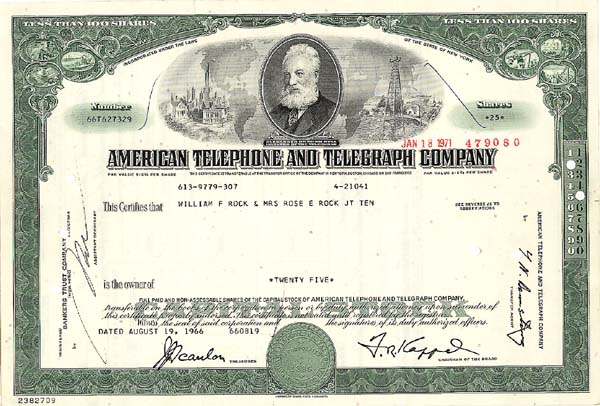 AT&T Corporation, originally the American Telephone and Telegraph Company, is the subsidiary of AT&T Inc. that provides voice, video, data, and Internet telecommunications and professional services to businesses, consumers, and government agencies.

During its long history, AT&T was at times the world's largest telephone company, the world's largest cable television operator, and a regulated monopoly. At its peak in the 1950s and 1960s, it employed one million people and its revenue was roughly US$3 billion annually.

In 2005, AT&T was purchased by Baby Bell and former subsidiary SBC Communications for more than $16 billion ($20.9 billion in present-day terms). SBC then changed its name to AT&T Inc.

AT&T started with Bell Patent Association, a legal entity established in 1874 to protect the patent rights of Alexander Graham Bell after he invented the telephone system. Originally a verbal agreement, it was formalized in writing in 1875 as Bell Telephone Company.

In 1880 the management of American Bell had created what would become AT&T Long Lines. The project was the first of its kind to create a nationwide long-distance network with a commercially viable cost-structure. The project was formally incorporated in New York State as a separate company named American Telephone and Telegraph Company on March 3, 1885. Originating in New York, its long-distance telephone network reached Chicago, Illinois, in 1892, with its multitudes of local exchanges continuing to stretch further and further yearly, eventually creating a continent-wide telephone system. On December 30, 1899, the assets of American Bell were transferred into its subsidiary American Telephone and Telegraph Company (formerly AT&T Long Lines); this was because Massachusetts corporate laws were very restrictive, and limited capitalization to ten million dollars, forestalling American Bell's further growth. With this assets transfer on the second to last day of the 19th Century, AT&T became the parent of both American Bell and the Bell System.

AT&T was involved mainly in the telephone business and, although it was a partner with RCA, was reluctant to see radio grow because such growth might diminish the demand for wired services. It established station WEAF in New York as what was termed a toll station. AT&T could provide no programming, but anyone who wished to broadcast a message could pay a "toll" to AT&T and then air the message publicly. The original studio was the size of a telephone booth. The idea, however, did not take hold, because people would pay to broadcast messages only if they were sure that someone was listening. As a result, WEAF began broadcasting entertainment material, drawing amateur talent found among its employees. Opposition to AT&T's expansion into radio and an agreement with the National Broadcasting Company to lease long distance lines for their broadcasts resulted in the sale of the station and its developing network of affiliates to NBC.

Throughout most of the 20th century, AT&T held a monopoly on phone service in the United States and Canada through a network of companies called the Bell System. At this time, the company was nicknamed Ma Bell.

On April 30, 1907, Theodore Newton Vail became President of AT&T. Vail believed in the superiority of one phone system and AT&T adopted the slogan "One Policy, One System, Universal Service." This would be the company's philosophy for the next 70 years.

Under Vail, AT&T began buying up many of the smaller telephone companies including Western Union telegraph. These actions brought unwanted attention from antitrust regulators. Anxious to avoid action from government antitrust suits, AT&T and the federal government entered into an agreement known as the Kingsbury Commitment. In the Kingsbury Commitment, AT&T and the government reached an agreement that allowed AT&T to continue operating as a monopoly. While AT&T periodically faced scrutiny from regulators, this state of affairs continued until the company's breakup in 1984.

The United States Justice Department opened the case United States v. AT&T in 1974. This was prompted by suspicion that AT&T was using monopoly profits from its Western Electric subsidiary to subsidize the cost of its network, a violation of anti-trust law. A settlement to this case was finalized in 1982, leading to the division of the company on January 1, 1984 into seven Regional Bell Operating Companies, commonly known as Baby Bells. These companies were:

Post-breakup, the former parent company's main business was now AT&T Communications Inc., which focused on long distance services, and with other non-RBOC activities.

AT&T acquired NCR Corporation in 1991. AT&T announced in 1995 that it would split into three companies: a manufacturing/R&D company, a computer company, and a services company. NCR, Bell Labs and AT&T Technologies were to be spun off by 1997. In preparation for its spin-off, AT&T Technologies was renamed Lucent Technologies. Lucent was completely spun off from AT&T in 1996.

On January 31, 2005, the "Baby Bell" company SBC Communications announced its plans to acquire "Ma Bell" AT&T Corp. for $16 billion. SBC announced in October 2005 that it would shed the "SBC" brand and take the AT&T brand along with the "T" NYSE ticker symbol.

From 1885 to 1910, AT&T was headquartered at 125 Milk Street in Boston. With its expansion it moved to New York City, to a headquarters on 195 Broadway (close to what is now the World Trade Center site). The property originally belonged to Western Union, of which AT&T held a controlling interest until 1913 when AT&T divested its interest as part of the Kingsbury Commitment. Construction of the current building began in 1912. Designed by William Welles Bosworth, who played a significant role in designing Kykuit, the Rockefeller mansion north of Tarrytown, New York, it was a modern steel structure clad top to bottom in a Greek-styled exterior, the three-story-high Ionic columns of Vermont granite forming eight registers over a Doric base. The lobby of the AT&T Building was one of the most unusual ones of the era. Instead of a large double-high space, similar to the nearby Woolworth Building, Bosworth designed what is called a "hypostyle hall", with full-bodied Doric columns modeled on the Parthenon, marking out a grid. Bosworth was seeking to coordinate the classical tradition with the requirements of a modern building. Columns were not merely the decorative elements they had become in the hands of other architects but created all the illusion of being real supports. Bosworth also designed the campus of MIT as well as Theodore N. Vail's mansion in Morristown, New Jersey.

In 1978, AT&T commissioned a new building at 550 Madison Avenue. This new AT&T Building was designed by Philip Johnson and quickly became an icon of the new Postmodern architectural style. The building was completed in 1984, the very year of the divestiture of the Bell System. The building proved to be too large for the post-divestiture corporation and in 1993, AT&T leased the building to Sony, which now owns it.

AT&T, prior to its merger with SBC Communications, had three core companies:

AT&T was also known as "Ma Bell" and affectionately called "Mother" by phone phreaks. During some strikes by its employees, picketers would wear T-shirts reading, "Ma Bell is a real mother." It is worth noting too that, before the break-up, there was greater consumer recognition of the "Bell System" name, in comparison to the name AT&T. This prompted the company to launch an advertising campaign after the break-up to increase its name recognition. Spinoffs like the Regional Bell Operating Companies or RBOCs were often called "Baby Bells". Ironically, "Ma Bell" was acquired by one of its "Baby Bells", SBC Communications, in 2005.

The AT&T Globe Symbol, the corporate logo designed by Saul Bass in 1983 and originally used by AT&T Information Systems, was created because part of the United States v. AT&T settlement required AT&T to relinquish all claims to the use of Bell System trademarks. It has been nicknamed the "Death Star" in reference to Star Wars. In 1999 it was changed from the 12-line design to the 8-line design. Again in 2005 it was changed to the 3D transparent "marble" design created by Interbrand for use by the parent company AT&T Inc. This name was also given to the iconic Bell Labs facility in Holmdel, New Jersey, now vacant.