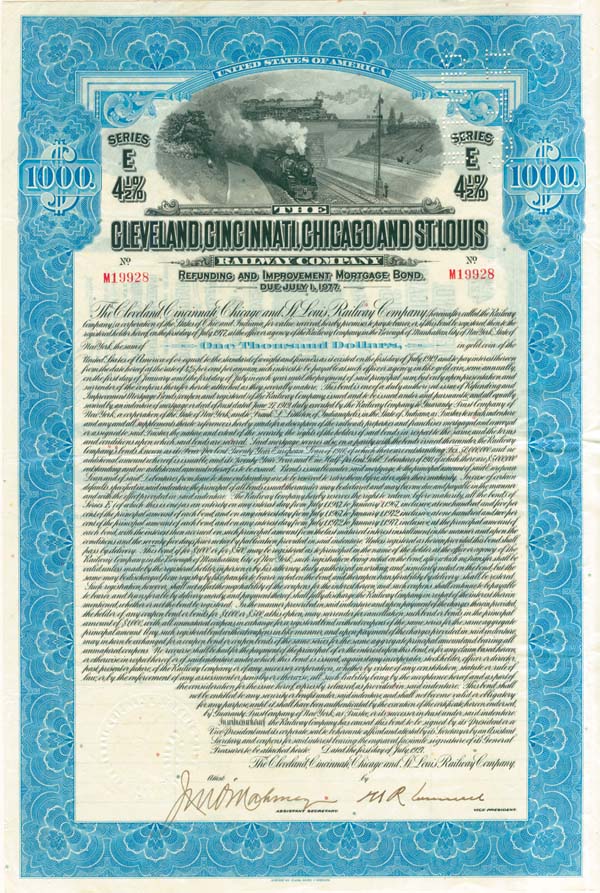 Years: 1950
$1,000 Bond. American Bank Note Co. The Cleveland, Cincinnati, Chicago and St. Louis Railway, also known as the Big Four Railroad and commonly abbreviated CCC&StL, was a railroad company in the Midwestern United States. Its primary routes were located in Illinois, Indiana, Michigan, and Ohio. The railroad once operated a terminal at Bellefontaine, Ohio, which included the largest roundhouse in use at that time between New York City and St. Louis, Missouri. The railroad was headquartered in Indianapolis, Indiana, at 105 S. Meridian Street. As of 2007 the building previously known as the Big Four Building is a Hampton Inn hotel. The railroad was formed on June 30, 1889 by the merger of the Cleveland, Columbus, Cincinnati and Indianapolis Railway, the Cincinnati, Indianapolis, St. Louis and Chicago Railway and the Indianapolis and St. Louis Railway. The following year, the company gained control of the former Indiana Bloomington and Western Railway. In 1906, the New York Central Railroad acquired the Big Four. The Big Four's lines were incorporated into Penn Central in 1968 with the merger of New York Central and the Pennsylvania Railroad. Penn Central declared bankruptcy in 1970, and in 1976 many of Big Four's lines were included in the government-sponsored Conrail. Conrail closed the Bellefontaine terminal in 1983, and the roundhouse was dismantled. Conrail was privatized in 1987, and divided in 1999 between CSX and Norfolk Southern.