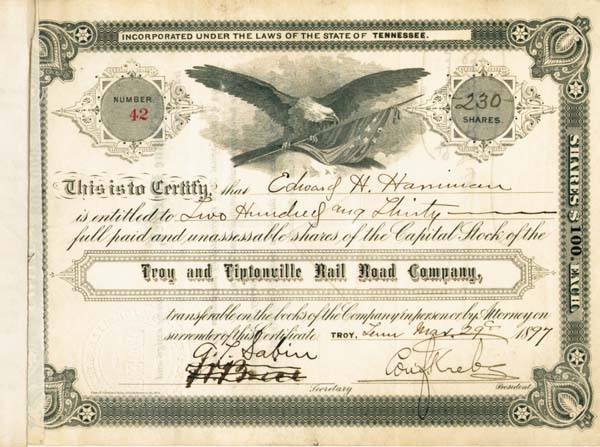 Edward Henry Harriman (1848-1909), American capitalist and one of the greatest railroad builders. He was President of the Union Pacific and is most famous for his battle against James J. Hill to gain control of the Northern Pacific which resulted in the stock market panic of 1901. 1897 Stock issued to and boldly signed by Harriman on an attached transfer. Neatly cut cancelled at center of stock, not affecting the signature. Rare!

Item ordered may not be exact piece shown. All original and authentic.
OUT OF STOCK
Request re-stock notice?
Email this to a friend
Request Info
Previous Item (David B. Hill signed Check)    (Edison Botonic Research Corporation signed by Thomas Alva Edison) Next Item