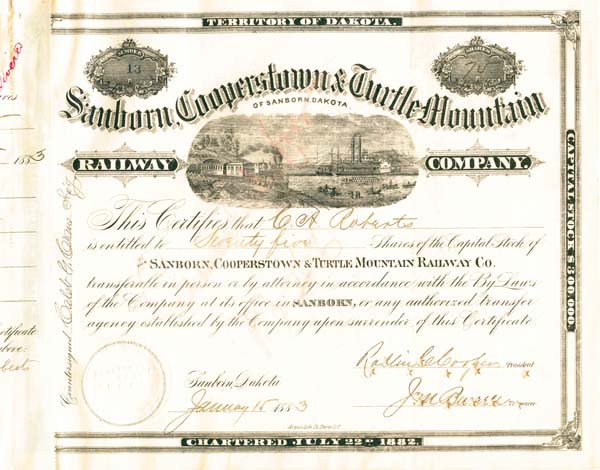 Sanborn is a city in Barnes County, North Dakota, United States. The population was 192 at the 2010 census. Sanborn was founded in 1879.

A post office has been in operation at Sanborn since 1879. The city was named in honor of J. N. Sanborn, an early settler. The town was an early contender for the county seat of Barnes County, but lost this role to Valley City in 1880. Its population declined after better roads allowed nearby farmers to trade in Valley City instead.

In 1881, before the Sanborn, Cooperstown and Turtle Mountain Railroad was built, mule teams were used by the Cooper Brothers to haul lumber and supplies from Sanborn to Cooperstown, a distance of forty miles. By February of 1883, a freighting train of 50 to 60 mules made trips bringing building supplies from the end of the tracks (12 miles south of town) to the booming Cooperstown. The rush of settlers was brought by two four-horse teams. Monday, August 27, 1883, the railroad was completed and the first train came gliding into town. A grand parade and celebration followed the arrival of the "Iron Horse". The railroad was constructed by the Sanborn, Cooperstown and Turtle Mountain Railway Company, which was owned and controlled by the Cooperstown Townsite Company. It was generally known that the Northern Pacific was behind the operation.

The Northern Pacific had a gentlemen's agreement with Great Northern that they would build no branch lines north of their main lines if the Great Northern would build none south. Buying of the railroad line after its construction was completed did not seem to violate this agreement. While the railroad was being built a disagreement arose between members of the Townsite Company who were building it, as to where to put the depot, at the end of the track, and, just where will be the end of the track? As first planned, it was to end on Lenham Avenue, one block inside the limits of the townsite. Here Mr. Lenham planned to build an elevator, and locate a lumberyard on his avenue. But Mr. Roberts planned to build a flourmill on his avenue two blocks further north. So here the depot was built and completed by the end of October 1883. During this time, a large surfacing gang was at work hauling in gravel and leveling the railroad yard. Work had commenced on the engine house located just south of the Lenham Elevator. The structure was to be 36' x 60'. A very commodious section house was erected by the railroad company at the foot of Rollin Avenue. The main part was 30' x 36' and the wing 20' x 16', two stories high. Outside the south end of town the railroad built a turntable. For several years the train left Cooperstown at 5 a.m. went to Sanborn and returned to Cooperstown the same day.

By November 2, 1883, the N.P. Express Company had established an office here with R.M. Cowen as agent and within two weeks a temporary electrical connection was made with the Sanborn office. The pioneers and homesteaders were very dependent on the trains in these early years for carrying their freight, building supplies and general merchandise. Trains also brought immigrants to their destinations and carried mail. Sometimes trains ran for special occasions such as: baseball games with close neighboring towns, 4th of July events, early county fairs and circuses. People needing medical attention or hospitalization were many times taken by special train to larger towns. Throughout the years the Northern Pacific operated the railroad line and eventually the tracks were extended to Jessie and Binford in Griggs County and to McHenry in Foster County. (http://www.webfamilytree.com) Also available unissued at a lesser price. Please inquire if interested.

Item ordered may not be exact piece shown. All original and authentic.
Email this to a friend
Request Info
Previous Item (Saint Paul and Northern Pacific Railway Co. Issued to and signed by Daniel S. Lamont, C.S. Mellen and Geo. H. Earl)    (Seattle and International Railway - Stock Certificate) Next Item