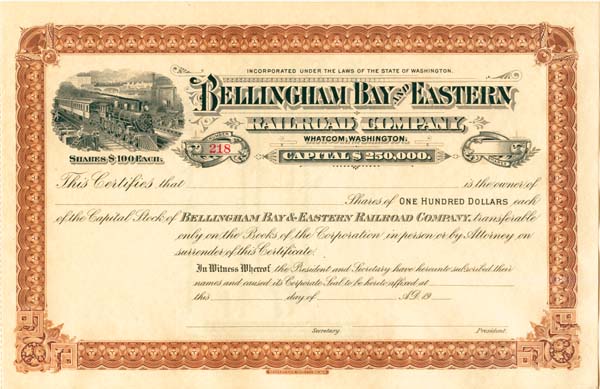 The Bellingham Bay and Eastern Railroad (BB&E) was built in 1891 to Blue Canyon from Bellingham to bring coal to the docks . Before this railroad was built a barge would bring the coal over from blue canyon to a place presumably at the Blodel Donavon Lumber mill, then trans-loaded into gondolas that would be sent down the trolley tracks on Alabama Hill to the waterfront.

Once the BB&E was built in 1891 from Bellingham to Wickersham to connect with the Seattle, Lake Shore and Eastern, that was building north from Seattle. The Bellingham Bay and Eastern was a timber an coal hauler, and even had passenger service from Wickersham to Bellingham.

The Northern Pacific Railroad bought the SLS&E to reach Canada and an interchange with the Canadian Pacific that had built west from Montreal and BB&E to reach Bellingham, and it's port and Canneries that lined the Bay.

The Northern Pacific operated a daily except Sunday mixed from Auburn to Bellingham. It also operated a regular freight over the line. In 1972 the Burlington Northern was in the middle of tearing up the line, when the father of Frank and Bob Culp purchased the remaining 4 miles that had yet to be pulled up. The segment is from Wickersham to Park on the south end of Lake Whatcom.

There was a 40 year court battle due to the fact that some landowners had easements given to the railroad over their property and when the last revenue train operated they were under the assumption they receive the land the back. But what the contract actually read, was train, what this meant was that the Burlington Northern could operate any kind of train; maintenance or revenue every 18 months and it would still keep the easement. The resulting court battle that lasted 40 years, went all away to the Washington Supreme Court and in 2011 they handed down a ruling that stated that Frank Culp's Lake Whatcom Railway could operate over the line without restriction, but the landowners could cross over his tracks to reach the lake. There was one landowner, during the court battle, that was so bitter she was going to rip up the track itself for scrap. Frank did the ripping up himself, saving the track and ties for future relaying of that section. As of June 2012 this is yet to happen as a landowner had sold it to the City of Bellingham and so now Lake Whatcom Railway has to obtain permission from the city to build over their land. He operates both sections, one with his train from Wickersham to milepost 3.5 and with a speeder over the last .25 miles to the end of track.

Even though the Lake Whatcom Railway operates only over 4 miles of the original BB&E, if you follow the original alignment along the east side of Lake Whatcom you're still able to see where the line used to run. On Northshore Drive, the original right-of-way is hugging the Lake and there is no wooden trestle crossing a small creek. The only other way can tell sold railroad grade, is that it's flat. In Bellingham, the Northern Pacific ran down the alley between Railroad Avenue and State Street, for 3 blocks their still rails in the alley and even switch that could be thrown.

The Railroad Trail walking path policy old alignment of both the Milwaukee Road former BB&BC branch to the Blodel Donovan Mill, and the BB&E mainline though Whatcom Falls Park. 1/4 mile east of the Barkley Haggen grocery store, you can see the remnants of a trestle that carried a branch of the Milwaukee into the mill. In Whatcom falls Park itself, and walking paths are on both railroads. There is a trestle that crosses Whatcom Falls creek, that is ex Milwaukee. All of these locations can be seen from Google earth. (From Hubpages, Railroads of Whatcom County Washington)