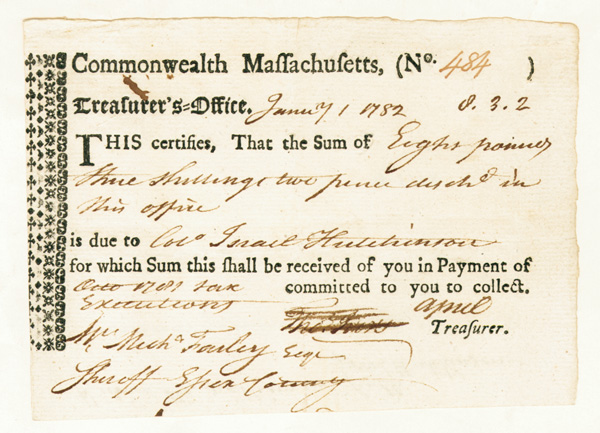 Years: 1782
Israel Hutchinson (1728-1811), soldier in the battles of Ticonderoga & Lake George in the French war of 1757-59. He commanded a company at Lexington, was lieutenant-colonel in 1775, commanded the 27th regiment at the siege of Boston and in the campaign of 1776, and was with Washington in the retreat through New Jersey. Made out to him & signed at back. Choice Condition! Extremely rare!!

Item ordered may not be exact piece shown. All original and authentic.
OUT OF STOCK
Request re-stock notice?
Email this to a friend
Request Info
Previous Item (Bedford and Stoystown Turnpike Road Co - Stock Certificate)    (Massachusetts Payment Order) Next Item