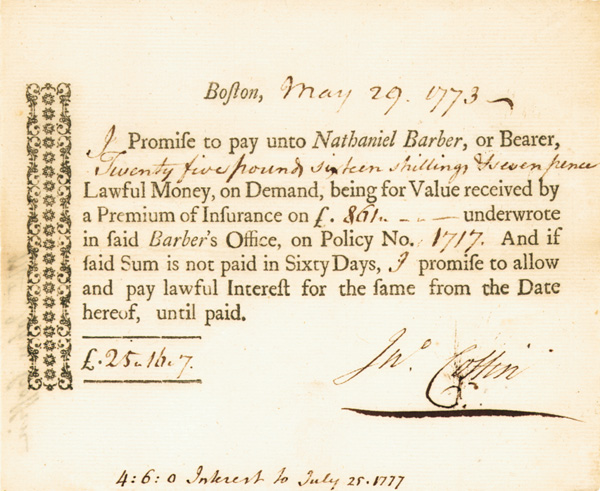 Years: 1773
This note may be signed by John Coffin at the age of 17? Possibly, but would require further research. At least, this is a rare Boston insurance related note of 1773. John Coffin (1756-1838), Massachusetts Loyalist, had gone to sea as a boy and by the time he was 18 was given command of a ship. In 1775, his ship took part in bringing nearly a whole regiment under General Howe to Boston. He fought gallantly at Bunker Hill for the British. Later, it is said that the Colonials offered $10,000 for his head. In the War of 1812 he raised 700 men. At his death in 1838, he was the oldest general in the British army! A John Coffin signed this very early Promise to pay to Nathaniel Barber, or Bearer 1773 Premium of Insurance note. Likely to insure cargo of a ship. It would be especially exciting to verify whether this is the very same Coffin. Regardless, this is the earliest American Insurance related piece weve had. Rare! Choice Condition!

Item ordered may not be exact piece shown. All original and authentic.
OUT OF STOCK
Request re-stock notice?
Email this to a friend
Request Info
(Bedford and Stoystown Turnpike Road Co - Stock Certificate) Next Item