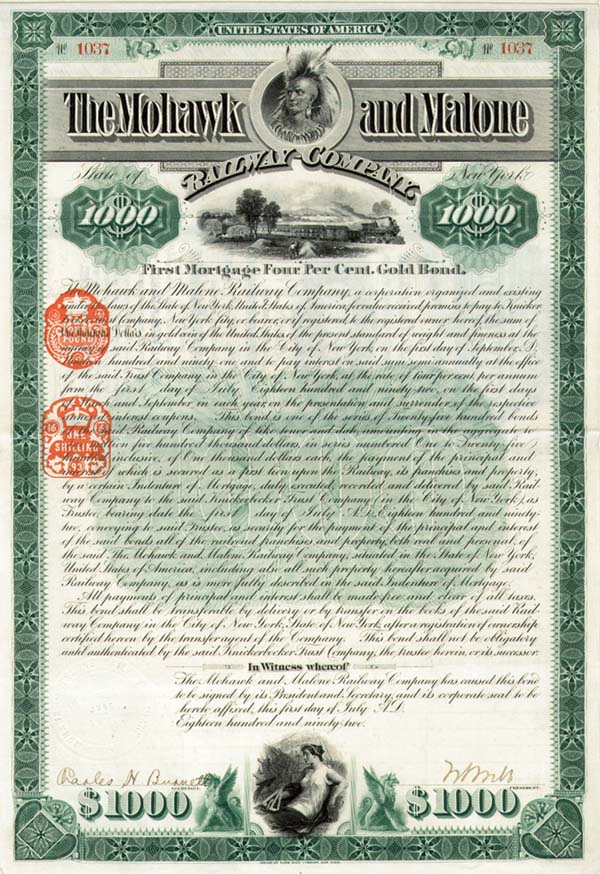 Dr. William Seward Webb's Mohawk and Malone Railway crossed the northern Adirondacks at Tupper Lake Junction, just north of Tupper Lake. Webb was president of the Wagner Palace Car Company. He began by purchasing the 3 ft (914 mm) narrow gauge Herkimer, Newport and Poland Railway, which ran 16 miles (26 km) from Herkimer to Poland, converting its trackage to 4 ft 8 1⁄2 in (1,435 mm) standard gauge, and straightening it to avoid multiple crossings of the West Canada Creek. He then had track built from Tupper Lake to Moira and thence to Montreal, Quebec. This was called variously the Adirondack and St. Lawrence Railroad and the Mohawk and Malone.

It opened in 1892 from Malone Junction to Childwold Station with a branch from Lake Clear Junction to Saranac Lake. After 1893, it was controlled by the New York Central and Hudson River Railroad.

Through the first half of the 20th Century, the New York Central ran day and night trains on the route for service from Utica to Montreal via Lake Clear Junction and Malone. In the post-World War II period, the NYC's North Star train, and later, the Iroquois, provided direct sleeping car service from New York City's Grand Central Terminal to Lake Placid. The NYC in early 1953 terminated service north of Malone toward Montreal. In mid-1957 the company shortened the terminus back from Malone to Lake Clear Junction with all service terminating at the Lake Placid branch that left the division's main route at Lake Clear Junction. On April 24, 1965 the NYC ran its final train on the route.

In the 1990s service on the southern segment of the route between Utica and Thendara would return with tourist excursions run by the Adirondack Scenic Railroad. In the 2010s, the state of New York attempted to convert most of the Utica - Lake Placid segment to a rail trail. However, the latter railroad successfully won an effort in court to resist rail removal. The New York state Supreme Court ultimately sided with the railroad on September 26, 2017, annulling the rail trail plan in its entirety.

Stations served in final years of passenger service, 1957 to 1965