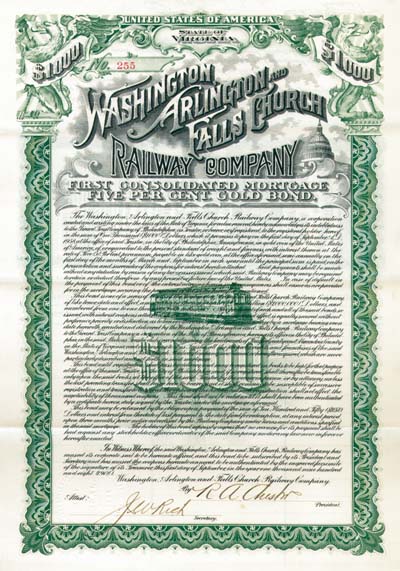 Years: 1908
$1,000 5% Bond was payable in U.S. Gold Coin. Uncancelled. Many coupons. Excellent Condition. Rare! Northern Virginia did not have any street railways until 1892, when the Washington, Alexandria and Mount Vernon Electric Railway (WA&MV) opened an electric trolley line between Alexandria and Mount Vernon. It merged with the Washington, Arlington and Falls Church Railway (WA&FC) in 1913 to form the Washington-Virginia Railway. The company entered bankruptcy in 1924, and in 1927 the two former systems were split. The WA&MV was bought by the owner of the Alexandria, Barcroft and Washington Rapid Transit Company, a competing line of buses, and last ran in 1932; the WA&FC was reorganized as the Arlington and Fairfax Railway and operated until 1939. A third system, the Washington and Old Dominion Railway (W&OD), began in the 1850s as the Alexandria, Loudoun and Hampshire Railroad, a steam railroad. It was leased by the newly formed W&OD, which in 1912 connected the line to the electrified Great Falls and Old Dominion Railroad. Electric trolleys last ran in 1941, but the company continued to operate freight trains (and passenger trains until 1951) until 1968. (From Revolvy.com)

Item ordered may not be exact piece shown. All original and authentic.
OUT OF STOCK
Request re-stock notice?
Email this to a friend
Request Info
Previous Item (Washington and Chesapeake Beach Railway - $500 Bond)    (Tehuantepec Company £250 - Bond) Next Item