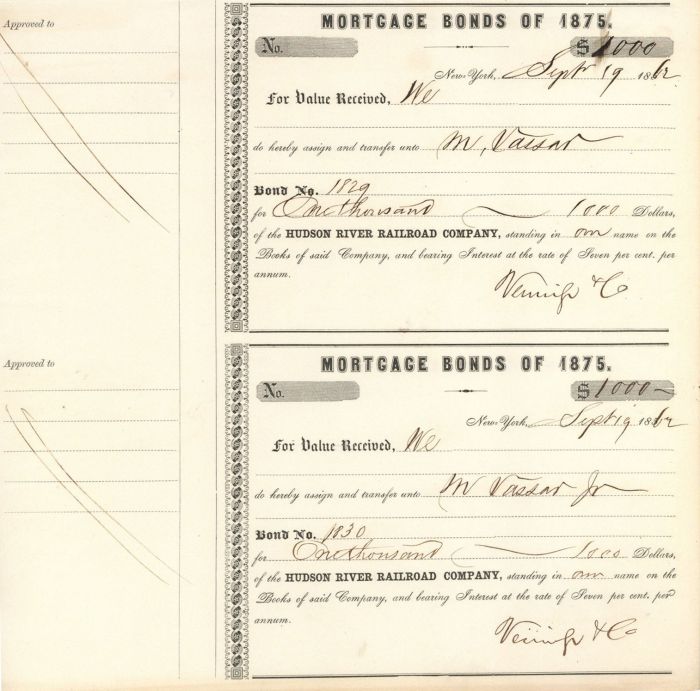 Uncut sheet of 2 Bond Transfers issued to M. Vassar Jr. but not signed.

Matthew Vassar (April 29, 1792  June 23, 1868) was an English-born American brewer and merchant. He founded the eponymous Vassar College in 1861. He was a cousin of John Ellison Vassar. He was born in East Dereham, Norfolk, England. In 1796, he emigrated with his family to New York and settled on a farm near Poughkeepsie. When Vassar was 14 years old, his parents had him apprenticed to a tanner. One day before he was to begin his apprenticeship, he ran away to Newburgh, New York, subsequently entering the brewing business. He took over his family's small brewery at the age of eighteen. Over the next several decades he developed his Poughkeepsie brewery into one of the country's largest, by the 1830s becoming perhaps the first to achieve nationwide distribution to every state and amassing a sizable personal fortune in the process. Lydia Booth, a niece of Matthew Vassar, encouraged him to establish a women's college in the United States, which would be located in Poughkeepsie. In January 1861, the New York Legislature passed an act to incorporate Vassar College, one of the first women's colleges in the U.S. On 26 February 1861, Matthew Vassar presented the college's Board of Trustees with a tin box containing half of his fortune, $408,000 (approximately $9,700,000 in 2008 dollars) and a deed of conveyance for 200 acres of land to establish the campus. On June 23, 1868, Vassar delivered his farewell address to the Vassar College Board of Trustees; he died in the middle of delivering the eleventh page of the speech. In a bill enacted on 15 July 1870, the U.S. Congress waived any tax claim(s) to the donation to the college. Matthew Vassar's home, Springside, located south of Poughkeepsie, is a National Historic Landmark.

Item ordered may not be exact piece shown. All original and authentic.
Email this to a friend
Request Info
Previous Item (New York Central Railroad Co. - $10,000 Bond)    (Baltimore and Ohio Railroad Co. Issued to and signed by Wallace Nutting - Autographed Bond) Next Item