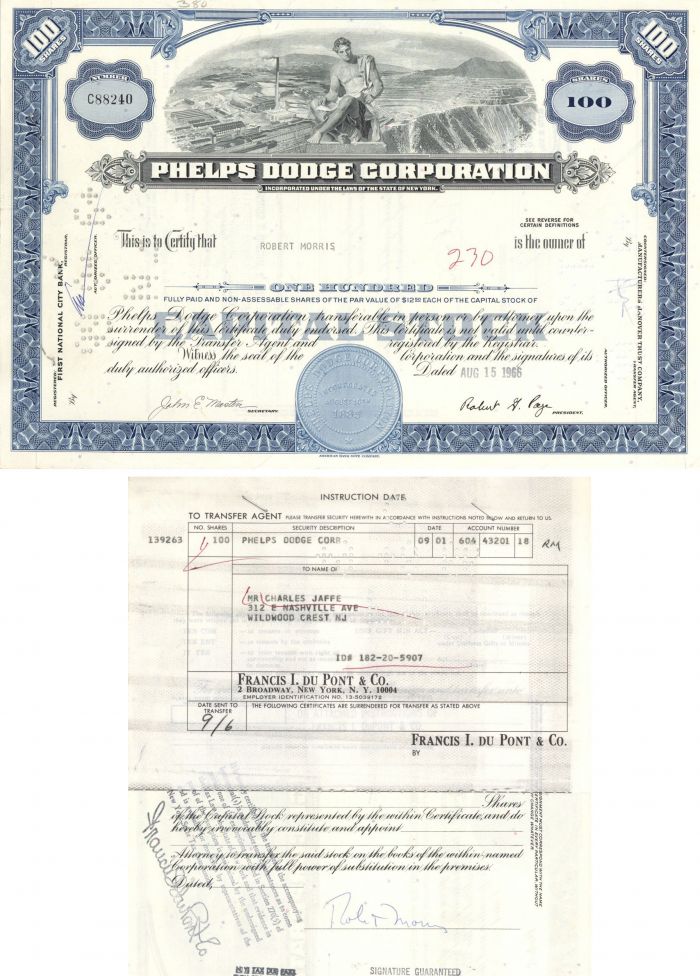 Stock issued to and signed at back by Robert Morris. Possible decendent?

Elected to the Continental Congress in 1775, he participated on many of the committees involved in raising capital and provisions for the Continental Army. Early in 1776, he was given a special commission by congress, with authority to negotiate bills of exchange for, and to solicit money by other means for the operation of the war. One of the most successful such devices were the lotteries. In late 1776, with the Continental Army in a state of severe deprivation because of a shortage of capital and the failure of several of the colonies in paying for the war, Morris loaned $10,000 of his own money to the government. This money provisioned the desperate troops, who went on to win the Battle of Trenton (Washington Crossing). Throughout the war he personally underwrote the operations of privateers, ships that ran the British Blockades at great risk and thus brought needed supplies and capital into the colonies.

In 1781 he devised a plan for a National Bank and submitted it to Congress. It was approved and became the Bank of North America, an institution that brought stability to the colonial economy, facilitated continued finance of the War effort, and would ultimately establish the credit of the U. S. with the nations of Europe. Morris was immediately appointed Financial Agent (Secretary of Treasury) of the U. S., in order to direct the operation of the new bank.

Following the war, he served in the Pennsylvania Legislature. He was also a delegate to the Constitutional Convention in 1787, and thereafter an advocate for the new constitution. He was then sent as a Senator for Pennsylvania when that constitution was ratified. In 1789, President George Washington appointed Morris Secretary of the Treasury, but he declined the office and suggested Alexander Hamilton instead. Morris completed his office as Senator and then retired from public service. He never recovered the wealth that he enjoyed before the revolution. What was left of his fortune was soon lost to land speculation in the western part of New York state. He died in 1806, in relative poverty, at the age of 73.