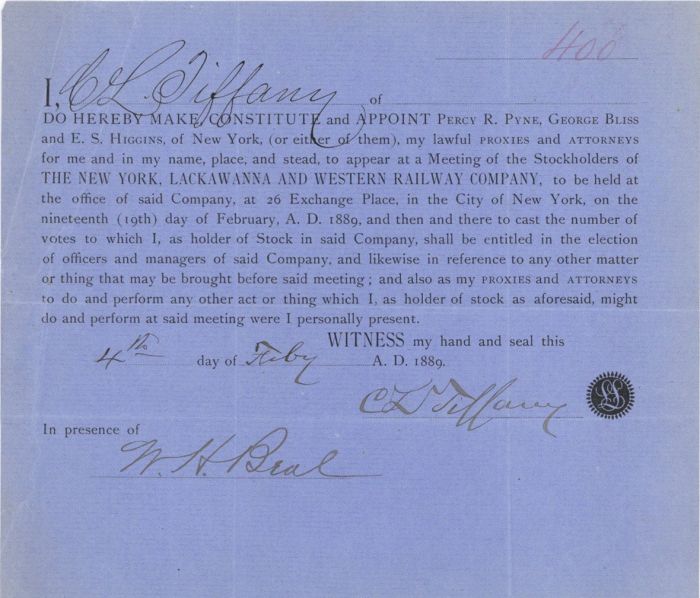 Charles Lewis Tiffany (February 15, 1812  February 18, 1902) was an American businessman and jeweller who founded New York City's Tiffany & Co. in 1837. Known for his jewelry expertise, Tiffany created the country's first retail catalog and introduced the English standard of sterling silver in imported jewelry in 1851.

Tiffany was born on February 15, 1812, in Killingly, Connecticut, the son of Chloe (Draper) and Comfort Tiffany. Tiffany was educated in a district school and in an academy in Plainfield, Connecticut. Starting at the age of 15, he helped manage a small general store started by his father, the owner of a cotton-manufacturing company. He later worked at the office of his father's mill. The Tiffany family descended from the immigrant Squire Humphrey Tiffany (England, 1630-Swansea, Massachusetts, 1685), who had lived in the Massachusetts Bay Colony in 1660.

In 1837, with $1,000 borrowed from his father, Tiffany and a school friend, John B. Young, set up a small stationery and gift shop in New York City. Their first three days in business brought them only $4.38 in total sales, but two years later they were still in business, selling glassware, porcelain, cutlery, clocks and jewelry.

The store expanded in 1841 and changed its name to Tiffany, Young and Ellis. It established a reputation for selling only the finest goods and specialized in Bohemian glass and porcelain. It also began manufacturing its own jewelry. In 1848, when the political unrest in Europe caused great depreciation in the price of precious stones, Tiffany invested heavily in diamonds, which were sold at a great profit a few years later.

In 1853, the company was reorganized under the name Tiffany and Company and opened branches in Paris (1850) and London (1868). The store also relocated uptown to a Fifth Avenue location in that decade. At the beginning of the American Civil War, foreseeing that the jewelry business would suffer, he turned most of his capital to the manufacture of swords, medals and similar war material.

Tiffany was terribly embarrassed in an 1872 diamond and gemstone hoax perpetrated by Philip Arnold that cost investors more than half a million dollars.

In cooperation with Thomas Edison, Tiffany created footlights and other methods of theater lighting. As a result of this, Broadway and other shows became more popular during that time.

The firm acquired and sold some of the French Crown Jewels in 1887, firmly establishing its reputation.

Charles Tiffany died at his home in Manhattan, New York, on February 18, 1902, at age 90. At the time of his death his company was capitalized at more than $2 million and acknowledged as the most prominent jewelry company in North America.

In addition to his business, Tiffany was a patron of the Metropolitan Museum of Art and one of the founders of the New York Society of Fine Arts.

Tiffany was made a chevalier of the Legion of Honour in 1878.

Condition: Excellent
Item ordered may not be exact piece shown. All original and authentic.
OUT OF STOCK
Request re-stock notice?
Email this to a friend
Request Info
Previous Item (Land Grant signed by secretary for T. Roosevelt)    (13 Appointments signed by The Taylor and Pyne Families - Autograph) Next Item