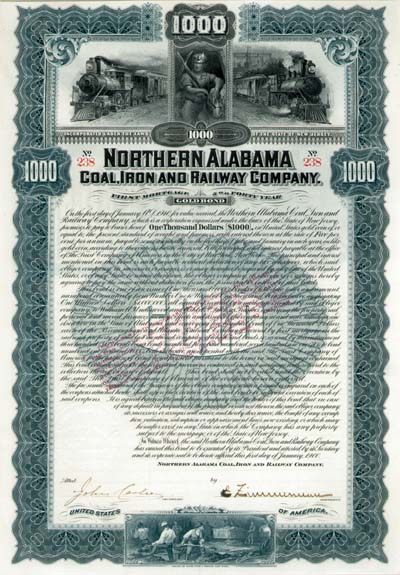 The pioneering South Carolina Canal and Rail Road Company, Southern's earliest predecessor line and one of the first railroads in the United States, was chartered on December 19, 1827, and ran the nation's first regularly scheduled steam-powered passenger train  the wood-burning Best Friend of Charleston  over a six-mile section out of Charleston, South Carolina, on December 25, 1830. By October 1833, its 136-mile line to Hamburg, South Carolina, was the longest in the world. The company leased enslaved African Americans from plantation owners when free white people refused to work in the swamps. The company eventually purchased 89 people to work as slaves.

As railroad fever struck other Southern states, networks gradually spread across the South and even across the Appalachian Mountains. By 1857 the Memphis and Charleston Railroad was completed to link both Charleston, South Carolina, and Memphis, Tennessee. The Western North Carolina Railroad was halted because voters were angry about that law allowed purchasers of private bonds to have the train tracks veer to their towns. The provision of the laws that allowed this was not repealed until Reconstruction.

Rail expansion in the South was also halted with the start of the Civil War. The Battle of Shiloh, the Siege of Corinth and the Second Battle of Corinth in 1862 were motivated by the importance of the Memphis and Charleston line, the only eastwest rail link across the Confederacy. The Chickamauga Campaign for Chattanooga, Tennessee, was also motivated by the importance of its rail connections to the Memphis and Charleston and other lines. Also in 1862 the Richmond and York River Railroad, which operated from the Pamunkey River at West Point, Virginia, to Richmond, Virginia, was a major focus of George McClellan's Peninsular Campaign, which culminated in the Seven Days Battles and devastated the tiny rail link. Late in the war, the Richmond and Danville Railroad was the Confederacy's last link to Richmond, and transported Jefferson Davis and his cabinet to Danville, Virginia, just before the fall of Richmond in April 1865.

Known as the "First Railroad War", the Civil War left the South's railroads and economy devastated. Most of the railroads, however, were repaired, reorganized and operated again. Convict lease was a near continuation of slavery as charges were often only applied to people of African descent. Five-hundred African Americans were assigned to provide back breaking labor on the Western North Carolina Railroad. Men were shipped to and from the worksite in iron shackles and around twenty were drowned in the Tuckasegee River weighted down by their shackles. In the area along the Ohio River and Mississippi River, construction of new railroads continued throughout Reconstruction. The Richmond and Danville System expanded throughout the South during this period, but was overextended, and came upon financial troubles in 1893, when control was lost to financier J. P. Morgan, who reorganized it into the Southern Railway System.

Southern Railway came into existence in 1894 through the combination of the Memphis and Charleston Railroad, the Richmond and Danville system and the East Tennessee, Virginia and Georgia Railroad. The company owned two-thirds of the 4,400 miles of line it operated, and the rest was held through leases, operating agreements and stock ownership. Southern also controlled the Alabama Great Southern and the Georgia Southern and Florida, which operated separately, and it had an interest in the Central of Georgia. Additionally, the Southern Railway also agreed to lease the North Carolina Railroad Company, providing a critical connection from Virginia to the rest of the southeast via the Carolinas.

Southern's first president, Samuel Spencer, brought more lines into Southern's organized system. During his 12-year term, the railway built new shops at Spencer, North Carolina, Knoxville, Tennessee, and Atlanta, Georgia, upgraded tracks, and purchased more equipment. He moved the company's service away from an agricultural dependence on tobacco and cotton and centered its efforts on diversifying traffic and industrial development. On November 29, 1906, Spencer was killed in a train wreck.

After the line from Meridian, Mississippi, to New Orleans, Louisiana, was acquired in 1916 under Southern's president Fairfax Harrison, the railroad had assembled the 8,000-mile, 13-state system that lasted for almost half a century. Additionally, Southern have operated 6,791 miles of road at the end of 1925, but its flock of subsidiaries added 1000+ more.

The Central of Georgia became part of the system in 1963, and the former Norfolk Southern Railway was acquired in 1974. Despite these small acquisitions, the Southern disdained the merger trend when it swept the railroad industry in the 1960s, choosing to remain a regional carrier. In 1978 President L. Stanley Crane said the refusal to add routes through merger was a mistake, especially the decision not to add a connecting route to Chicago.

The Southern tried to gain access to Chicago by targeting the Monon Railroad and the Chicago and Eastern Illinois Railroad but both those railroads went to Southern's competitor, the Louisville and Nashville Railroad. A decade later Crane tried to rectify the situation by merging with the Illinois Central Railroad. When that failed, he petitioned the Interstate Commerce Commission to give Southern the old Monon routes and the old Atlantic Coast Line route from Jacksonville to Tampa by way of Orlando among other properties as a condition of the I.C.C.'s approval of the Seaboard Coast Line  Chessie System merger in 1979. While the request was supported by the I.C.C.'s Enforcement Bureau, it was ultimately unsuccessful.

Southern and its predecessors were responsible for many firsts in the industry. Starting in 1833, its predecessor, the South Carolina Canal and Rail Road, was the first to carry passengers, U.S. troops and mail on steam-powered trains and experimented with railroad lighting. They had a pine log fire on a flatcar, covered in sand, to provide light at night before inexpensive kerosene was invented for lamps.

In 1939, the Southern Railway went under dieselization and became the first major railroad in the United States to be fully converted from steam to diesel-powered locomotives in 1953. On January 20, 1953, the last steam-powered passenger train arrived in Knoxville, Tennessee. On June 17, 1953, the railroad's last steam-powered freight train arrived in Chattanooga, Tennessee. Although a handful of 63 steam locomotives were still in the Southern's employ in 1954 according to Southern Railway System, Steam Locomotives and Boats by Richard E. Prince.

The Southern Railway was active in mechanization, used bank engines, is widely credited with inventing unit trains for coal and new freight cars, and understood the power of marketing using the promotional phrase "Southern Gives a Green Light to Innovation".

In 1966, a popular steam locomotive excursion program was instituted under the presidency of W. Graham Claytor Jr., and included Southern veteran locomotives No. 630, No. 722, No. 4501, and Savannah & Atlanta No. 750 along with non-Southern locomotives such as Texas & Pacific No. 610, Canadian Pacific No. 2839, and Chesapeake & Ohio No. 2716. The steam program continued after the 1982 merger with the Norfolk and Western to form the Norfolk Southern, through increased operating costs and concerns ended the program in 1994. Norfolk Southern reinstated the steam program on a limited basis from 2011 to 2015, as the 21st Century Steam program.

In the early 2000s, a 22-mile (35 km) loop of former Southern Railway right-of-way encircling central Atlanta neighborhoods was acquired and is now the BeltLine trail.

Along with its famed (Southern) Crescent and Southerner, the Southern's other named trains included:

The Southern Railway also handled ticket sales and operations for subsidiary railroads, such as:

The Southern Railway also participated in the operation of the City of Miami, which was operated by the Southern Railway over the Central of Georgia trackage from Birmingham, Alabama, to Albany, Georgia, where it traded off with the Seaboard Coast Line until its discontinuation in 1971.

When Amtrak took over most intercity rail service in 1971, Southern initially opted out of turning over its passenger routes to the new organization. However, it shared operation of its flagship train, the New Orleans-New York Southern Crescent, with Amtrak. Under a longstanding haulage agreement inherited from Penn Central and the Pennsylvania Railroad, Amtrak carried the train north of Washington. By the late 1970s, growing revenue losses and equipment-replacement expenses convinced Southern it could not continue in the passenger business. It handed full control of its passenger routes to Amtrak in 1979.

Roads owned by the Southern Railway

Presidents of the Southern Railway: