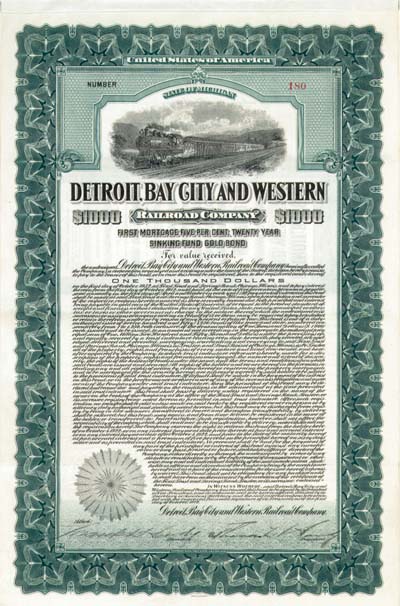 Years: 1912
$1,000 5% Sinking Fund Gold Bond. Uncancelled. Attractive graphics by Western Bank Note. 20 or more coupons. Very popular state! Very Scarce! From John Speller's Web Pages: Among the railroads of south-eastern Michigan the Detroit, Bay City & Western Railroad was last on the scene and one of the first to close. It neither went to Detroit, nor, from the point of view of Bay City, was it Western. Construction began in 1910 and the line reached Port Huron on 27 October 1916, though it had to rely on trackage rights over the Grand Trunk Railway for the last mile or two into Port Huron. The 97.3 mile line's chief projector was Thomas Lincoln Handy (1866-1922), a local entrepreneur with interests in the box making industry and coal mining. Following Mr. Handy's death the railroad went bankrupt in 1924. The section between Roseburg and Caro was sold to the Detroit, Caro & Sandusky Railway, and the rest of the line was torn up. The Roseburg to Peck section was also abandoned in 1937.