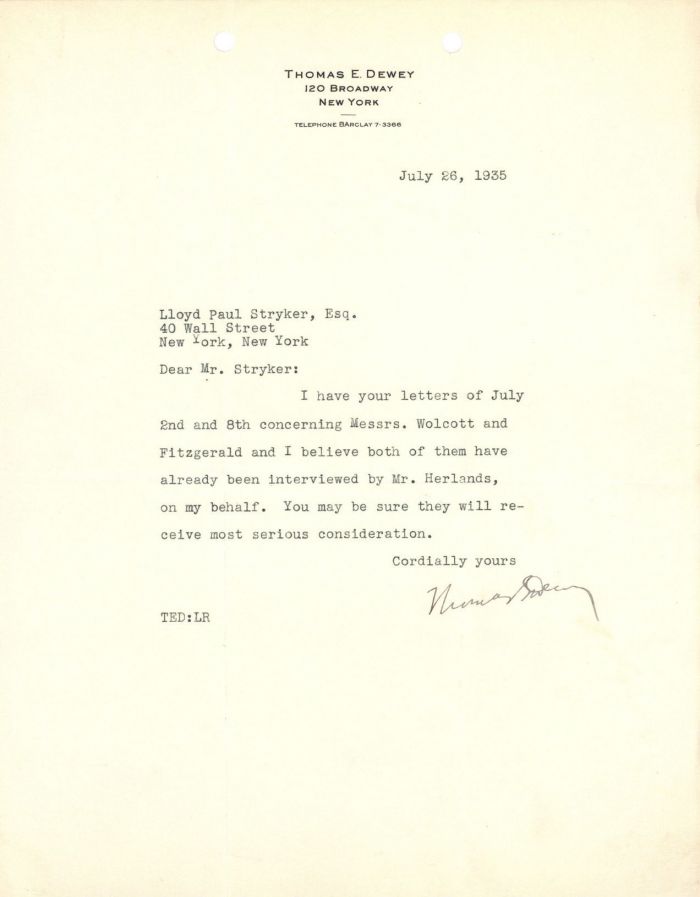 As a New York City prosecutor and District Attorney in the 1930s and early 1940s, Dewey was relentless in his effort to curb the power of the American Mafia and of organized crime in general. Most famously, he successfully prosecuted Mafioso kingpin Charles "Lucky" Lucianoon charges of forced prostitution in 1936. Luciano was given a 30- to 50-year prison sentence. He also prosecuted and convicted Waxey Gordon, another prominent New York City gangster and bootlegger, on charges of tax evasion. Dewey almost succeeded in apprehending Jewish mobster Dutch Schultz as well, but Schultz was murdered in 1935 in a hit ordered by The Commission itself; he had disobeyed The Commission's order forbidding him from making an attempt on Dewey's life.

Dewey led the moderate faction of the Republican Party during the 1940s and 1950s, in opposition to conservative Ohio Senator Robert A. Taft. Dewey was an advocate for the professional and business community of the Northeastern United States, which would later be called the Eastern Establishment. This group consisted of internationalists who were in favor of the United Nations and the Cold War fight against communism and the Soviet Union, and it supported most of the New Deal social-welfare reforms enacted during the administration of Democrat Franklin D. Roosevelt.

Following his political retirement, Dewey served from 1955 to 1971 as a corporate lawyer and senior partner in his law firm Dewey Ballantine in New York City. In March 1971, while on a golfing vacation in Miami, Florida, he died from a heart attack. Following a public memorial ceremony at St. James' Episcopal Church in New York City, Dewey was buried in the town cemetery of Pawling, New York.