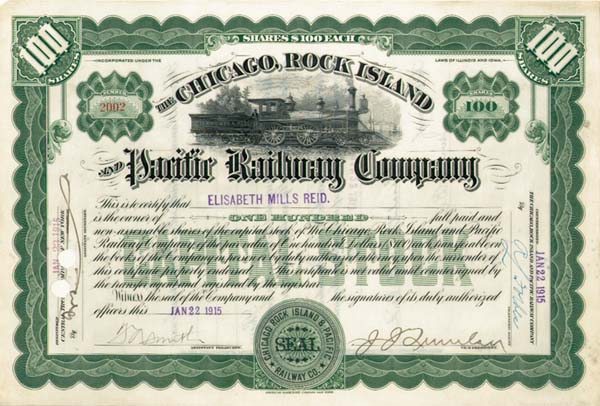 Elisabeth Mills Reid, daughter of Whitelaw Reid and Wife of D. Ogden Mills. A very wealthy woman! Stock of the Chicago, Rock Island and Pacific Rwy, 1915 boldly issued to Elisabeth and signed by her at back. Excellent Condition.
Its ancestor, the Rock Island and La Salle Railroad Company, was incorporated in Illinois on February 27, 1847, and an amended charter was approved on February 7, 1851, as the Chicago and Rock Island Railroad. Construction began October 1, 1851, in Chicago, and the first train was operated on October 10, 1852, between Chicago and Joliet. Construction continued on through La Salle, and Rock Island was reached on February 22, 1854, becoming the first railroad to connect Chicago with the Mississippi River. In Iowa, the C&RI's incorporators created (on February 5, 1853) the Mississippi and Missouri Railroad Company, to run from Davenport to Council Bluffs, and on November 20, 1855, the first train to operate in Iowa steamed from Davenport to Muscatine. The Mississippi river bridge between Rock Island and Davenport was completed on April 22, 1856. In 1857, Abraham Lincoln represented the Rock Island in an important lawsuit regarding bridges over navigable rivers. The suit had been brought by the owner of a steamboat, which was destroyed by fire after running into the Mississippi river bridge. Lincoln argued that not only was the steamboat at fault in striking the bridge but that bridges across navigable rivers were to the advantage of the country. The M&M was acquired by the C&RI on July 9, 1866, to form the Chicago, Rock Island and Pacific Railroad Company. The railroad expanded through construction and acquisitions in the following decades.

Item ordered may not be exact piece shown. All original and authentic.
Email this to a friend
Request Info
Previous Item (Eliphalet Remington III Signed Check)    (Ellington Piano Company issued to and signed by D.H. Baldwin - Stock Certificate) Next Item