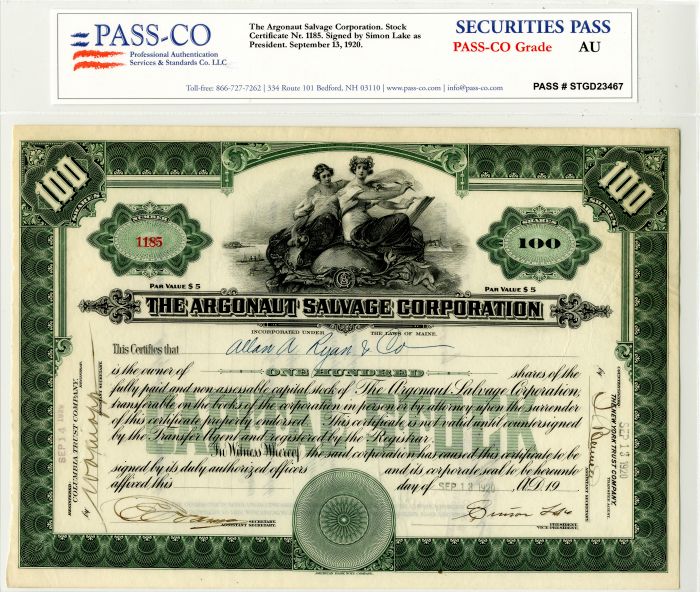 Simon Lake (September 4, 1866  June 23, 1945) was a Quaker American mechanical engineer and naval architect who obtained over two hundred patents for advances in naval design and competed with John Philip Holland to build the first submarines for the United States Navy.

Born in Pleasantville, New Jersey on September 4, 1866. Lake joined his father's foundry business after attending public schools in New Jersey and Pennsylvania. Lake had a strong interest in undersea travel.

Neither Argonaut nor Lake's following submarine, Protector, built in 1901, were accepted by the Navy. Protector was the first submarine to have diving planes mounted forward of the conning tower and a flat keel. Four diving planes allowed Protector to maintain depth without changing ballast tank levels, and to dive level without a down-angle. Level diving was a feature of several subsequent Lake designs, notably the first three US G-class submarines. Protector also had a lock-out chamber for divers to leave the submarine. Lake, lacking Holland's financial backing, was unable to continue building submarines in the United States. He sold Protector to Imperial Russia in 1904 as the Osetr and spent the next seven years in Europe designing submarines for the Austro-Hungarian Navy, Germany's Kaiserliche Marine, and the Imperial Russian Navy (Osetr- and Kaiman-class submarines).

In 1922 the United States and other countries signed treaties limiting the size of their navies. This led to financial difficulties which forced the Lake Torpedo Boat Company to close in the mid-1920s. Following the company's closure, Lake continued designing maritime salvage systems including obtaining permission to partially salvage the Lusitania off the south Irish coast and then later a failed attempt to salvage gold from HMS Hussar, a British frigate that sank in 1780 in New York City's East River with his submarine, the Explorer. Lake redesigned the former USS O-12 (SS-73) as the Arctic exploration submarine Nautilus, used by Sir Hubert Wilkins in a 1931 expedition. He also advised the United States Navy on submarine technology and maritime salvage during World War II. Lake was a member, Freemason of Monmouth Lodge No. 172 in Atlantic Highlands, New Jersey. He later affiliated with Ansantawae Lodge No. 89 in Milford, Connecticut.

By his death, Lake had witnessed the submarine's arrival as a front-line weapon in the US Navy.

The US Navy built a class of two submarine tenders named in his honor, the Simon Lake class; USS Simon Lake (AS-33) was in service between 1964 and 1999.

In 1989 Simon Lake was inducted into the Toms River (New Jersey) Schools' Hall of Fame.

A Milford, Connecticut grammar school named in his honor closed in June 2010. Lakes bay in West Atlantic City, New Jersey is where he tested prototypes.

An Atlantic Highlands, NJ street, Simon Lake Drive, at the marina was named in his honor.

The Argonauts (/ˈɑːrɡənɔːt/; Ancient Greek: Ἀργοναῦται, Argonautai, 'Argo sailors') were a band of heroes in Greek mythology, who in the years before the Trojan War (around 1300 BC) accompanied Jason to Colchis in his quest to find the Golden Fleece. Their name comes from their ship, Argo, named after its builder, Argus. They were sometimes called Minyans, after a prehistoric tribe in the area.