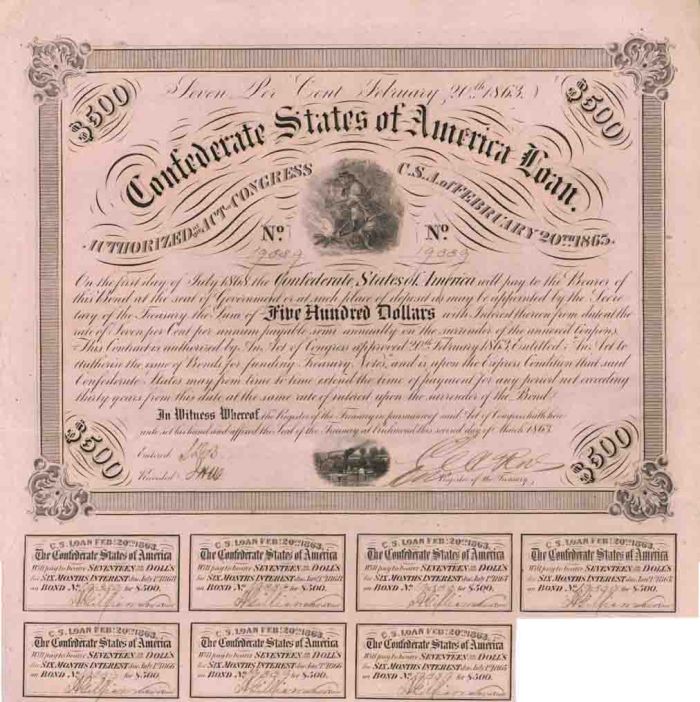 The Confederate States of America (CSA), commonly referred to as the Confederate States or the Confederacy, was an unrecognized breakaway state that existed from February 8, 1861, to May 9, 1865, and that fought against the United States of America during the American Civil War. Eleven states with declarations of secession from the Union formed the main part of the CSA. They were South Carolina, Mississippi, Florida, Alabama, Georgia, Louisiana, Texas, Virginia, Arkansas, Tennessee, and North Carolina. Kentucky and Missouri also had declarations of secession and full representation in the Confederate Congress during their Union army occupation.

The Confederacy was formed on February 8, 1861 by an initial seven slave states: South Carolina, Mississippi, Florida, Alabama, Georgia, Louisiana, and Texas. All seven of the states were located in the Deep South region of the United States, whose economy was heavily dependent upon agricultureparticularly cottonand a plantation system that relied upon slaves of African descent for labor. Convinced that white supremacy and the institution of slavery were threatened by the November 1860 election of Republican candidate Abraham Lincoln to the U.S. presidency, on a platform which opposed the expansion of slavery into the western territories, the Confederacy declared its secession from the United States, with the loyal states becoming known as the Union during the ensuing American Civil War. In a speech known today as the Cornerstone Address, Confederate Vice President Alexander H. Stephens described its ideology as centrally based "upon the great truth that the negro is not equal to the white man; that slavery, subordination to the superior race, is his natural and normal condition".

Before Lincoln took office on March 4, 1861, a provisional Confederate government was established on February 8, 1861. It was considered illegal by the United States federal government, and many Northerners thought of the Confederates as traitors. After war began in April, four slave states of the Upper SouthVirginia, Arkansas, Tennessee, and North Carolinaalso joined the Confederacy. The Confederacy later accepted the slave states of Missouri and Kentucky as members, accepting rump state assembly declarations of secession as authorization for full delegations of representatives and senators in the Confederate Congress; they were never substantially controlled by Confederate forces, despite the efforts of Confederate shadow governments, which were eventually expelled. The government of the United States (the Union) rejected the claims of secession as illegitimate.

The Civil War began on April 12, 1861, when the Confederates attacked Fort Sumter, a Union fort in the harbor of Charleston, South Carolina. No foreign government ever recognized the Confederacy as an independent country, although Great Britain and France granted it belligerent status, which allowed Confederate agents to contract with private concerns for arms and other supplies.

In 1865, the Confederacy's civilian government disintegrated in a chaotic manner: the Confederate States Congress adjourned sine die, effectively ceasing to exist as a legislative body on March 18. After four years of heavy fighting and 620,000850,000 military deaths, all Confederate land and naval forces either surrendered or otherwise ceased hostilities. The war lacked a formal end, with Confederate forces surrendering or disbanding sporadically throughout most of 1865. The most significant capitulation was Confederate general Robert E. Lee's surrender to Ulysses S. Grant at Appomattox on April 9, after which any lingering doubt regarding the war's outcome and/or the Confederacy's prospect for survival was extinguished, although another sizable force under Confederate general Joseph E. Johnston did not formally surrender to William T. Sherman until April 26. Contemporaneously, President Lincoln had been assassinated by Confederate sympathizer John Wilkes Booth on April 15, 1865. Confederate President Jefferson Davis's administration declared the Confederacy dissolved on May 5 and Davis himself acknowledged in later writings that the Confederacy "disappeared" in 1865. On May 9, 1865, US president Andrew Johnson officially called an end to the armed resistance in the South.

After the war, Confederate states were readmitted to the Congress during the Reconstruction era, after each ratified the 13th Amendment to the U.S. Constitution outlawing slavery. "Lost Cause" ideology was an idealized view of the Confederacy, valiantly fighting for a just cause. It emerged in the decades after the war among former Confederate generals and politicians, as well as organizations such as the United Daughters of the Confederacy and the Sons of Confederate Veterans. Particularly intense periods of Lost Cause activity developed around the time of World War I, and during the Civil Rights Movement of the 1950s and 1960s in reaction to growing public support for racial equality. Lost Cause advocates sought to ensure future generations of Southern whites would continue to support white supremacist policies such as the Jim Crow laws through activities such as building prominent Confederate monuments and writing school history textbooks to paint the Confederacy in a favorable light. The modern display of Confederate flags primarily started during the 1948 presidential election when the battle flag was used by the Dixiecrats in opposition to the Civil Rights Movement and segregationists continue the practice as a rallying flag for demonstrations to the present day.