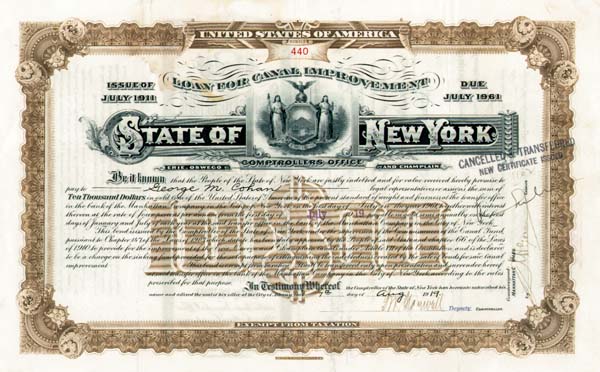 George M. Cohan (1878-1942), Composer, Playwright, Actor, and Producer. Started in vaudeville with his family as a child. In his early years, he wrote Give My Regards to Broadway and Yankee Doodle Boy. His boisterous patriotism became the hallmark of his career. He would often rouse the audience to wild enthusiasm simply by dancing across the stage with a flag. Excelling neither in singing, dancing, nor acting, he nonetheless won the hearts of millions by his sheer exuberance on stage. A few stage successes include George Washington, Jr. 1906 (Youre a Grand Old Flag), The Man Who Owns Broadway (Theres Something About a Uniform), The Yankee Prince, The Song and Dance Man, and American Born, and many others. His famous song Over There was composed in honor of the American Expeditionary Force. It became virtually the American Anthem during World War I and well over a million copies of recordings and sheet music were sold. In 1940, Congress awarded Cohan a special Medal of Honor for writing Over There and Youre a Grand Old Flag. He died in 1942, the year in which Yankee Doodle Dandy, an Academy Award-winning film based on his life, was released. $10,000 New York Bond Loan For Canal Improvement dated 1919, attractively engraved in the Capitol by Quayle & Sons, Albany. Boldly made out to George M. Cohan at front and very nicely signed at back. A couple of tiny hole cancellations do not effect the bold signature. Minor light stain mentioned only for accuracy otherwise Excellent Condition. A great Patriotic Autograph in Patriotic Times. Extremely Rare!!!