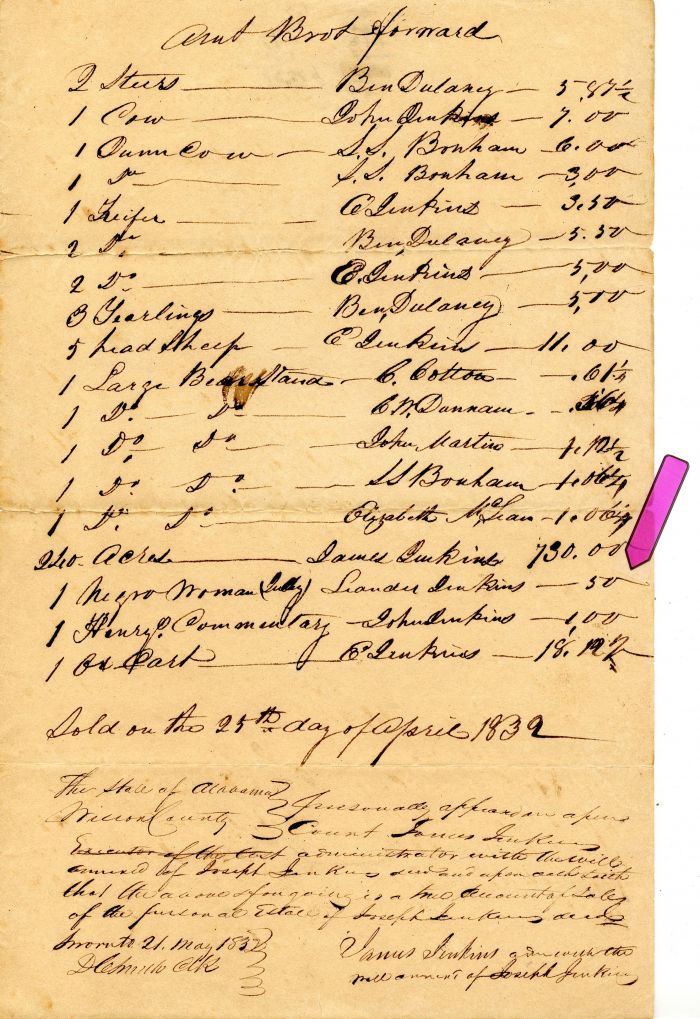 3 page document regarding the sale of 1 negro women for 50 (cents or dollars?) Willox County, Alabama.

Slavery and enslavement are both the state and the condition of being a slave, who is someone forbidden to quit their service for another person (a slaver), while treated as property. Slavery typically involves the enslaved person being made to perform some form of work while also having their location dictated by the slaver. Historically, when people were enslaved, it was often because they were indebted, or broke the law, or suffered a military defeat, and the duration of their enslavement was either for life or for a fixed period of time after which freedom was granted. Individuals, then, usually became slaves involuntarily, due to force or coercion, although there was also voluntary slavery to pay a debt or obtain money for some purpose. In the course of human history, slavery was a typical feature of civilization, and legal in most societies, but it is now outlawed in all countries of the world, except as punishment for crime.

In 2019, approximately 40 million people, of whom 26 percent were children, were enslaved throughout the world despite it being illegal. In the modern world, more than 50 percent of enslaved people provide forced labour, usually in the factories and sweatshops of the private sector of a country's economy. In the industrialised countries, human trafficking is a modern variety of slavery; in the industrialised countries, enslavement by debt bondage is a common form of enslaving a person, such as captive domestic servants, forced marriage, and child soldiers.

Condition: Good
Item ordered may not be exact piece shown. All original and authentic.
OUT OF STOCK
Request re-stock notice?
Email this to a friend
Request Info
Previous Item (1821 - Slave Document)    (1834 - Alabama Slavery Document - Relating to Prescription and Medication) Next Item