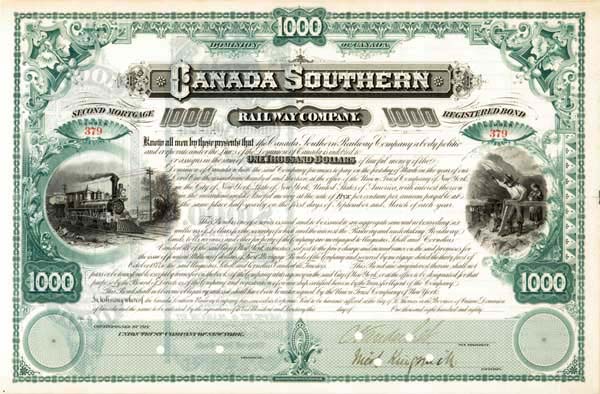 Cornelius Vanderbilt (1843-1899), This Canada Southern Railway Bond of the Dominion of Canada is one of the most beautiful of the 19th Century. The two vignettes are so rich and strong with the most beautiful engraving by American Bank Note Co., NY. The green color is so vibrant! Truly Exceptional with a lightly cancelled signature of Cornelius Vanderbilt. This $1,000 bond dated 1877 is in superb Mint Condition. From the Syracuse University Collection.
The Canada Southern Railway (AAR reporting marks CASO) was a railroad in southern Ontario, Canada, founded on February 28, 1868 as the Erie and Niagara Extension Railway and later adopted the Canada Southern Railway name on December 24, 1869. In 1904 the railroad was leased to the Michigan Central Railroad for 99 years; in 1929 it was subleased to the New York Central Railroad for 999 years. Its successors Penn Central (formed 1968) and Conrail (formed 1976) later exercised control. On April 30, 1985, the Canadian National Railway and Canadian Pacific Railway jointly purchased the former CASO from Conrail in order to acquire the Michigan Central Railway Tunnel and the Suspension Bridge at Niagara Falls. The CASO rarely operated its own rolling stock after acquisition, and its reporting mark was abolished in 1977.