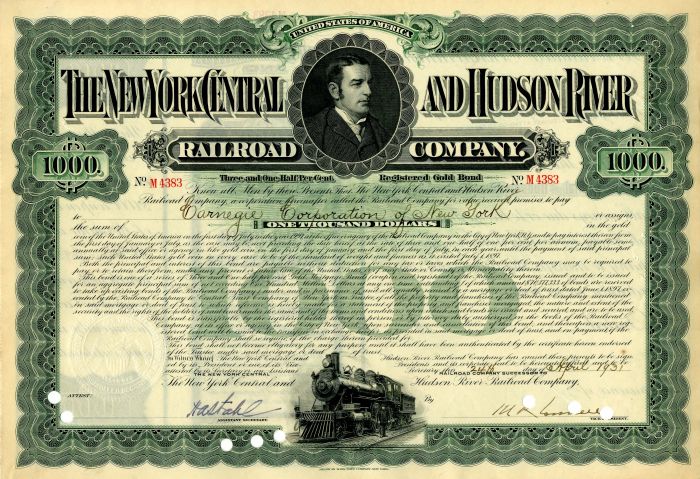 Andrew Carnegie (1835-1919) Industrialist; Philanthropist.  Shortly after immigrating to the U.S. from Scotland, Carnegie became private secretary to Thomas A. Scott who was just beginning his career with the Pennsylvania Railroad. Carnegie worked for Scott during the latter's position as chief of railroad transportation for the Union during the Civil War and, at the end of the conflict, left Scott to build a successful business in the sales of railroad securities, oil brokering and bridge building. In 1873 Carnegie moved into the emerging steel industry, and he and his partners were responsible for making the U.S. steel industry the world leader by the turn of the century. After selling his enterprises to J.P. Morgan's U.S. Steel in 1901, he spent the remainder of his life traveling and supporting his various philanthropies.

Among all of his many philanthropic efforts, the establishment of public libraries in the United States, the United Kingdom, and in other English-speaking countries was especially prominent. Carnegie libraries, as they were commonly called, sprang up on all sides. The first of which was opened in 1883 in Dunfermline, Scotland. His method was to build and equip, but only on condition that the local authority provided site and maintenance. To secure local interest, in 1885, he gave $500,000 to Pittsburgh for a public library, and in 1886, he gave $250,000 to Allegheny City for a music hall and library, and $250,000 to Edinburgh, Scotland, for a free library. In total Carnegie funded some 3,000 libraries, located in every U.S. state except Alaska, Delaware and Rhode Island. Carnegie also built libraries overseas in Britain, Ireland, Canada, Australia, New Zealand, the West Indies, and Fiji.

He owned Carnegie Hall in New York City from its construction in 1890 until his widow sold it in 1924.