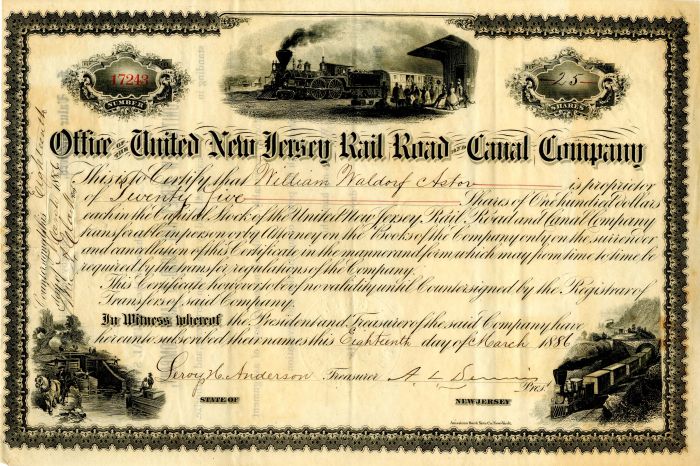 Stock issued to William Waldorf Astor but not signed.

William Waldorf Astor (1848-1919), 1st Viscount Astor was a financier and statesman and a member of the prominent Astor family.

William Astor was born in New York City, the only child of John Jacob Astor III (1822-1890) and Charlotte Augusta Gibbes (c.1825 -1887). He was educated in Germany and in Italy before studying at Columbia Law School. In 1878 he married Mary Dahlgren Paul (1858-1894) and went into politics, serving as a New York state assemblyman and senator. He was defeated in his bid for a seat in the United States Congress and in 1881 was appointed ambassador to Italy serving there until 1885. While living in Rome, Astor developed a life-long passion for art and sculpture.

On November 7, 1890, plans were filed with the New York City Building Department to construct a new hotel on the site of William Astor's residence. In 1891, after a family feud with his aunt Caroline Webster Schermerhorn Astor over matters of social seniority, Astor and his family moved to England, a decision that was published throughout all the major newspapers. Although the owner of the Waldorf Hotel built where his home had stood, William Astor visited it only once in his lifetime. In 1897, his cousin, John Jacob Astor IV (1864-1912) built the Astoria Hotel adjoining the Waldorf, and the complex then became known as the Waldorf-Astoria Hotel.

Arriving in England, at first Astor rented Lansdowne House in London until 1893 when he purchased a country estate at Cliveden-on-Thames in Taplow, Buckinghamshire from Hugh Lupus Grosvenor, 1st Duke of Westminster. In 1899 Astor became a British subject and in 1903 acquired Hever Castle near Edenbridge, Kent about 30 miles south of London. The huge estate, built in 1270 was where Anne Boleyn lived as a child. William Waldorf Astor invested a great deal of time and money to restore the castle, building what is known as the "Tudor Village" and creating a lake and lavish gardens. In 1905 he gave his son William Waldorf Astor II and his new daughter-in-law, the former Nancy Langhorne, the Cliveden estate as a wedding present.

With ambitions to be part of the literary world, Astor wrote two novels, became the owner of the Pall Mall Gazette and Pall Mall Magazine, and in 1911 purchased the London Sunday Observer. An avid lover of thoroughbred horse racing, he acquired a large stable of horses that won a number of important British races.
As a citizen in England, William Waldorf Astor used his great wealth for numerous public causes, especially during World War I for which King George V rewarded him with a baronetcy in 1916 and a year later made him 1st Viscount Astor. He died in Brighton, Sussex, England.