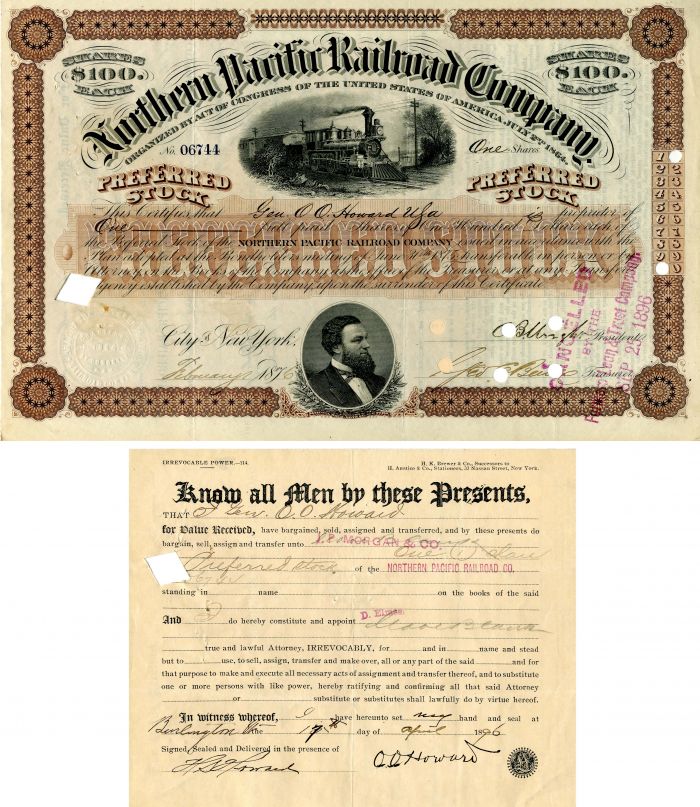 Stock issued to and signed at back on attached transfer by O.O. Howard. Rare!

Oliver Otis Howard (November 8, 1830  October 26, 1909) was a career United States Army officer and a Union general in the American Civil War. As a brigade commander in the Army of the Potomac, Howard lost his right arm while leading his men against Confederate forces at the Battle of Fair Oaks/Seven Pines in June 1862, an action which later earned him the Medal of Honor. As a corps commander, he suffered two humiliating defeats at Chancellorsville and Gettysburg in May and July 1863, but recovered from the setbacks as a successful corps and later army commander in the Western Theater.

Known as the "Christian general" because he tried to base his policy decisions on his deep, evangelical piety, he was given charge of the Freedmen's Bureau in mid-1865, with the mission of integrating the former slaves into Southern society and politics during the second phase of the Reconstruction Era. Howard took charge of labor policy, setting up a system that required freed people to work on former plantation land under pay scales fixed by the Bureau, on terms negotiated by the Bureau with white land owners. Howard's Bureau was primarily responsible for the legal affairs of the freedmen. He attempted to protect freed blacks from hostile conditions, but lacked adequate power, and was repeatedly frustrated by President Andrew Johnson.

Howard's allies, the Radical Republicans, won control of Congress in the 1866 elections and imposed Radical Reconstruction, with the result that freedmen were given the vote. With the help and advice of the Bureau, freedmen joined Republican coalitions and won at the ballot boxes of most of the southern states. Howard was also a leader in promoting higher education for freedmen, most notably in founding Howard University in Washington and serving as its president 186773.

After 1874, Howard commanded troops in the West, conducting a famous campaign against the Nez Perce tribe. Utley (1987) concludes that his leadership against the Apaches in 1872, against the Nez Perce in 1877, the Bannocks and Paiutes in 1878, and against the Sheepeaters in 1879 all add up to a lengthy record, although he did not fight as much as George Custer and Nelson Miles