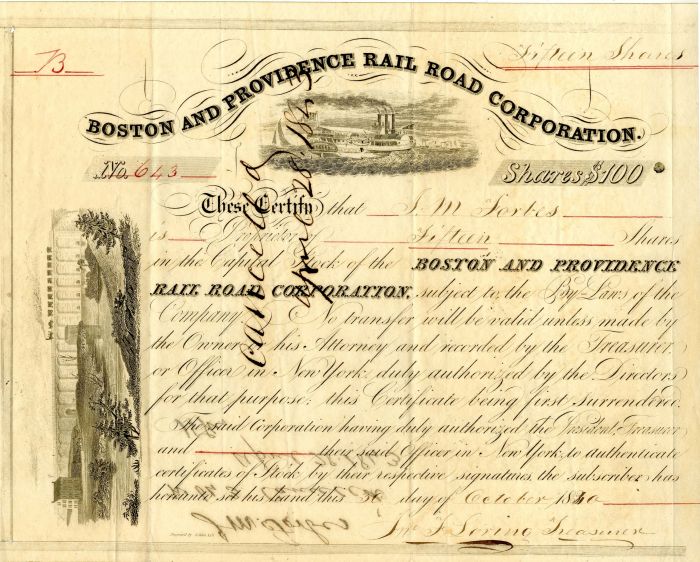 Years: 1841
Stock Issued to but not signed by John M. Forbes.

John Murray Forbes (February 23, 1813  October 12, 1898) was an American railroad magnate, merchant, philanthropist and abolitionist. He was president of both the Michigan Central railroad and the Chicago, Burlington and Quincy Railroad in the 1850s. He kept doing business with Russell & Company. Forbes was born on February 23, 1813, in Bordeaux, France. His father, Ralph Bennett Forbes, was a member of the Forbes family, descended from Scottish immigrants who attempted unsuccessfully to start a trade from Bordeaux. His mother, Margaret Perkins, was a member of the Boston Brahmin Perkins family merchant dynasty involved in the China trade. Among his siblings was older brother was Robert Bennet Forbes, sea captain and China merchant. His paternal uncle was John Murray Forbes, lawyer and diplomat, and his maternal uncle was merchant Thomas Handasyd Perkins. Among his cousins was the botanist Francis Blackwell Forbes. In 1814, his parents moved back to the Captain Robert Bennet Forbes House in Milton, Massachusetts. Forbes attended school at Phillips Academy in Andover, Massachusetts, then at Round Hill School in Northampton, Massachusetts, from 1823 to 1828. Forbes was one of three brothers sent by their uncle to Canton, China, and achieved some financial success during a short time spent trading in Canton. However, unlike his brother Robert, who devoted himself to the China trade, Forbes returned to Boston and became an early railroad investor and landowner. As with Jay Gould and E. H. Harriman, Forbes was an important figure in the building of America's railroad system. From March 28, 1846 through 1855, he was president of Michigan Central Railroad, and he was a director and president of the Chicago, Burlington and Quincy Railroad, he helped with the growth of the American Middle West. In addition, he founded J.M. Forbes & Co., an investment firm in Boston in 1838. In 1860, he was an elector for Abraham Lincoln. He served as the Chairman of the Republican National Committee during the administration of President Abraham Lincoln. Staunchly pro-Union, he is given credit for founding the New England Loyal Publication Society in early 1863 (Smith 1948). After the Civil War, Forbes was elected as a 3rd Class (honorary) Companion of the Military Order of the Loyal Legion of the United States. Forbes was a delegate to the Republican conventions of 1876, 1880 and 1884, he eventually became displeased with the Republican party and worked successfully to get Democrat Grover Cleveland elected President. He supplied money and weapons to New Englanders to fight slavery in Kansas and in 1859 entertained John Brown. Forbes's many philanthropic activities included the re-establishment of Milton Academy, a preparatory school south of Boston, Massachusetts in 1884.