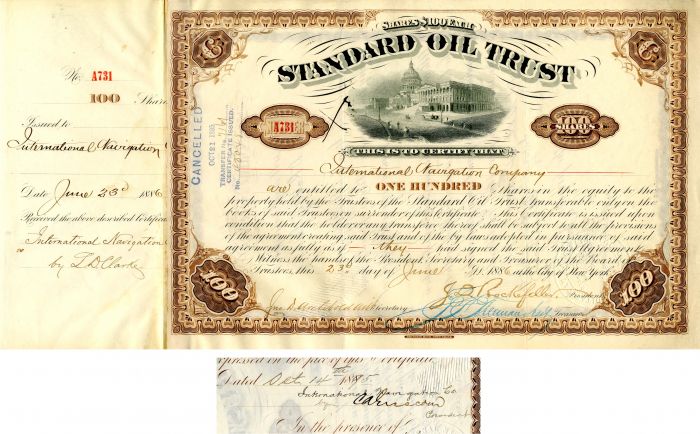 Stock signed by C.A. Griscom on the back and J.D. Rockefeller as president  and John D. Archbold on the front.

Griscom was "without question, the key figure in American transatlantic shipping" by 1900.

Griscom was born in 1841 to a long-established and prominent Philadelphia family. His father was Dr John D Griscom, a well-known local physician, and his mother was Margaret Acton Lloyd, a direct descendant of Thomas Lloyd. He attended local Quaker schools, as well as Central High School. In 1857, aged 16, he went to work as a clerk at Peter Wright and Sons, a Quaker shipping firm in Philadelphia. He became a partner in the business in 1863.

By 1901 he was described in the press as a millionaire.

In 1902, with financing from J. Pierpont Morgan, the companies were merged into the International Mercantile Marine shipping trust company, which operated 136 vessels over five transatlantic lines. Griscom served as president of IMM from 1902 until 1904, when he retired due to ill health. He remained as chairman, but was succeeded as president by J Bruce Ismay, who immediately removed headquarters to New York and reduced staffing levels.

Griscom also served on the board of directors of the Pennsylvania Railroad and United States Steel.

Griscom died of a stroke at the age of 71. In 1914 his widow erected a fountain in his memory in the Watch Hill section of Westerly, Rhode Island. It featured a bronze statue of the Niantic chief Ninigret by the sculptor Enid Yandell.

Griscom married Frances Canby Biddle (1840-1923), from a prominent Philadelphia Quaker family, in 1862, and they had six children:

John Dustin Archbold (1848-1916)
Capitalist. Speculator in Pennsylvania oil fields, 1866. When the South Improvement Co.,  whose membership included John D. Rockefeller, blocked the advance of Pennsylvania oil producers by obtaining railroad freight rebates, Archbold united the leading men of the Titusville region and defeated this strong Cleveland group. He then joined the Cleveland combination in working out a national organization to control the oil industry. John Dustin Archbold was a key executive in the growth and success of the Standard Oil Company. He became a Director of Standard Oil of Ohio Company in 1875 and by 1897 was functionally in charge of the company. As president (1896-1911) of Standard Oil Company of New Jersey (founded 1882) he was largely instrumental in building up that corporations business. From 1882 until his death he was dominant in Standard Oil Company policy, acted as spokesman for the company, and improved the product and its distribution. Over 30 years (1893-1914) he contributed funds (nearly $6,000,000) for 8 buildings at Syracuse University, including the full cost of the Archbold stadium (opened 1907, demolished 1972), Sims Hall (men's dormitory, 1907), the Archbold gymnasium (1909, nearly destroyed by fire in 1947 but still in use), and the oval athletic field.  A bequest from his estate gave an additional $500,000 to the university. Among his other charities was the New York Kindergarten Association, for which he built its headquarters building, in memory of his deceased daughter, Frances Dana Wolcott, and for which he also provided an endowment fund of $100,000. His grandson, Richard Archbold, founded the Archbold Biological Station in 1941 In 1911, at the dissolution of the original company, he became president of Standard Oil of New Jersey.