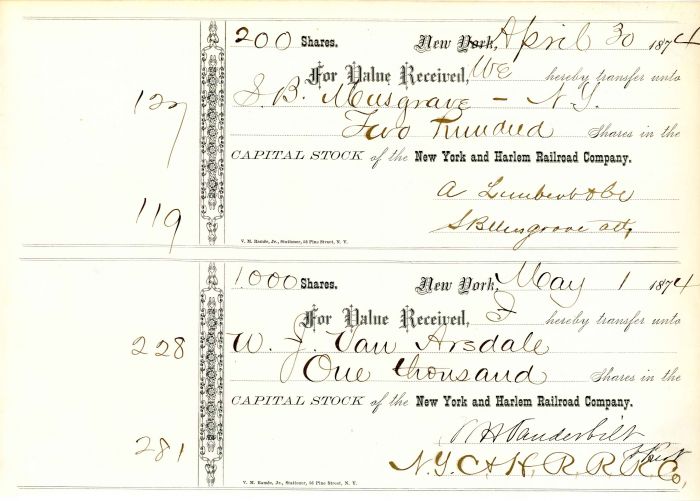 The New York and Harlem Railroad (now the Metro-North Railroad's Harlem Line) was one of the first railroads in the United States, and was the world's first street railway. Designed by John Stephenson, it was opened in stages between 1832 and 1852 between Lower Manhattan to and beyond Harlem. Horses initially pulled railway carriages, followed by a conversion to steam engines, then one to battery-powered Julien electric traction cars. In 1907 the then leaseholders of the line, New York City Railway, a streetcar operator, went into receivership. Following a further receivership in 1932 the New York Railways Corporation converted the line to bus operation. The Murray Hill Tunnel now carries a lane of road traffic, but not the buses. The line became part of the New York Central Railroad system with trackage rights granted to the New York, New Haven and Hartford Railroad into Manhattan. It is now part of the Metro-North Railroad system, and the only Manhattan trackage of that system. The company was incorporated on April 25, 1831 as the New York and Harlem Railroad, to link New York City with suburban Harlem. Among the company's founders was John Mason, a wealthy banker and president of Chemical Bank who was among the largest landowners in New York City. They decided to build their railroad on the eastern side of Manhattan Island, convinced that it would never be able to compete with steamboat traffic on the Hudson River. The first section, along Bowery from Prince Street north to 14th Street, opened on November 26, 1832. After that, the following sections opened: June 10, 1833 - north along Fourth Avenue to 32nd Street May 9, 1834 - north along Fourth Avenue to Yorkville, including the Murray Hill Tunnel October 26, 1837 - north along Fourth Avenue to Harlem, including the Yorkville Tunnel May 4, 1839 - south along Bowery, Broome Street and Centre Street to City Hall at Centre Street and Park Row September 3, 1842 - north to Williamsbridge December 1, 1844 - north to White Plains June 1, 1847 - north to Croton Falls December 31, 1848 - north to Dover Plains January 19, 1852 - north to Chatham Four Corners with a connection to the Albany and West Stockbridge Railroad, and trackage rights northwest to Albany November 26, 1852 - south along Park Row to Astor House at Park Row and Broadway A freight branch was built to Port Morris, from the 1853 purchase of the Spuyten Duyvil and Port Morris Railroad and abandoned late in the 20th century. Parts are still visible. Between 1847 and 1856, a track was built in Grand Street between Centre Street and Bowery (along with one block on the Bowery) for northbound trains. Southbound trains continued to use the old route. In 1864 or 1865, a branch was added for trains between downtown and the East 34th Street Ferry Landing, running along 32nd Street, Lexington Avenue and 34th Street. This was the start of separate horse car service, running between Astor House and the ferry. Grand Central Depot opened just north of 42nd Street in October 1871, and intercity passenger trains from the north were ended there. (Coincidentally, by this point, the first of the Manhattan New York elevated train services, the direct ancestor of the subways, had opened on Ninth Avenue.) Freight trains continued to operate along the tracks south of Grand Central, as did streetcars (still turning off at 42nd Street). As of 2017, Metro-North operates commuter passenger service from Grand Central Terminal, via Southeast (change from electric to diesel power), to Wassaic. The trackless right-of-way from Wassaic to Chatham is being converted to the Harlem Valley Rail Trail. As in other early railroads, the dominant propulsion in the railroad's early years was horse power. In 1837, steam engines were introduced, but their use was limited to areas outside of the heavily settled parts of the city, which was then north of 23rd Street. The New York City Common Council passed an ordinance on December 27, 1854, to take effect in 18 months, barring the NY&H from using steam power south of 42nd Street, due to complaints by persons whose property abutted the right-of-way. Before that, the steam locomotives had run to 32nd Street. When the ordinance took effect, the NY&H had not done anything. After much debate, including an injunction issued preventing the city from enforcing the ordinance, the courts struck down the injunction on July 30, 1858. In 1864, the railroad was purchased by Cornelius Vanderbilt, who consolidated it five years later with the Hudson River Railroad to form the New York Central and Hudson River Railroad, a precursor of the much larger New York Central Railroad. On July 2, 1870, horsecars started to run not only to the 34th Street Ferry but to 73rd Street via Madison Avenue. These trains ran through the Murray Hill Tunnel and turned west on 42nd before going north on Madison (northbound cars used Vanderbilt Avenue to 44th Street). The line was soon extended to 86th Street and then to Harlem. On April 1, 1873, the NY&H leased its freight lines to the New York Central and Hudson River Railroad, but the horsecar line south of Grand Central remained separate. This eventually became the New York Central Railroad and then part of Penn Central and Conrail. Metro-North Railroad took over the line in 1983. The first electric streetcar open to passengers in New York City, a Julien electric traction car, was run on September 17, 1888 on the line to 86th Street. The line went back to using horses for a time, but switched to a "below-grade third rail" (commonly called a "conduit") in 1897. The New York City Railway, which leased the Metropolitan, and hence also these lines, went into receivership on September 24, 1907. The receivers returned operation of the Fourth Avenue line back to the Metropolitan Street Railway on July 31, 1908. The lease was terminated on January 31, 1920 with operation was returned to the NY&H. On October 10, 1932, it was leased again, this time to the New York Railways Corporation, with the right to convert the line to bus operation. The stockholders voted to do this on February 19, 1934. An approximation of the route is now traveled by NYCT Bus's M1 bus. The Murray Hill Tunnel now carries a lane of roadway, but not the buses.
Condition: Excellent