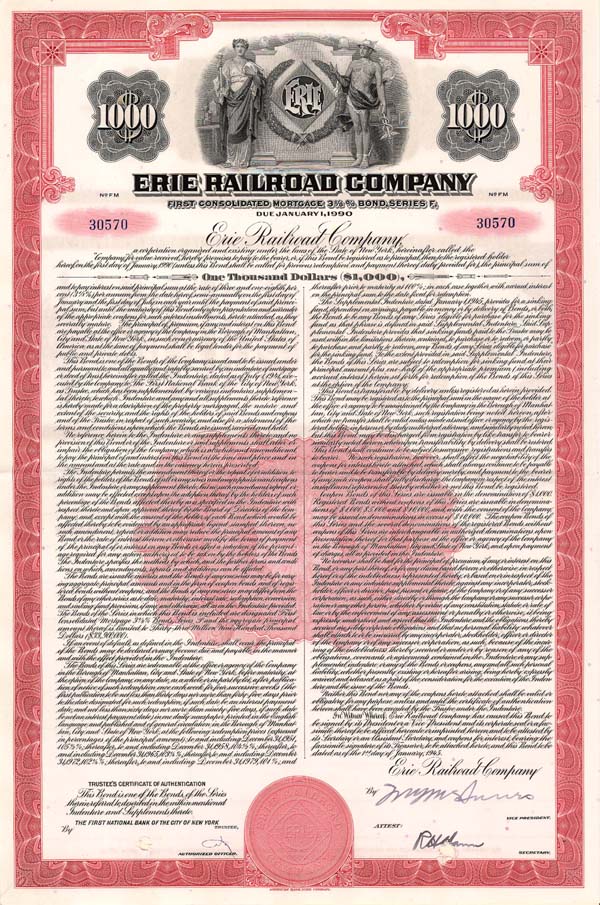 Years: 1940's-70's
Color: Red, Bl, Br
Railroad Bond. Various Denominations. Vignette of male and female figures with Erie logo. Varying varieties with and without coupons. Scarce!!! The Erie Railroad (AAR reporting marks ERIE) was a railroad that operated in New York State, New Jersey, Pennsylvania, Ohio, Indiana, and Illinois, connecting New York City with Lake Erie, and extending west to Cleveland, Ohio and Chicago. In 1960 it merged with the Delaware, Lackawanna and Western Railroad to form the Erie Lackawanna Railroad, becoming part of Conrail in 1976. It first started out as the New York and Erie Rail Road. It was chartered on April 24, 1832 to connect the Hudson River at Piermont, north of New York City, west to Lake Erie at Dunkirk. On February 16, 1841 the railroad was authorized to cross into the northeast corner of Pennsylvania on the west side of the Delaware River. Construction began in 1836, and it opened from Piermont to Goshen on September 23, 1841. After some financial problems, construction resumed in August 1846, and the next section, to Port Jervis, opened on January 7, 1848. Further extensions opened to Binghamton December 27, 1848, Owego January 1, 1849, and the full length to Dunkirk May 19, 1851.