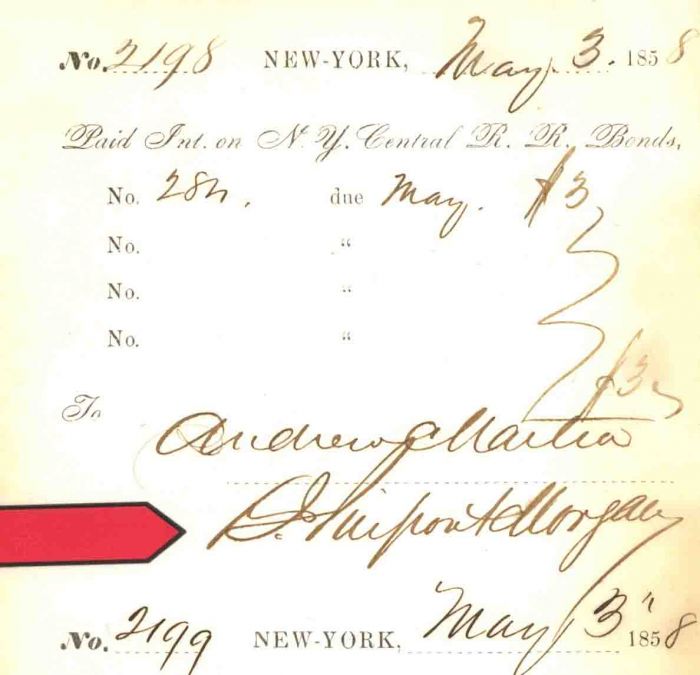 John Pierpont Morgan (1837-1913) An American financier and banker, who at the turn of the century (1901), was one of the wealthiest men in America. From 1860 to 1864, he was an agent and attorney in New York for George Peabody & Co. of London. Afterwards, for its successor, J. S. Morgan & Co. he became its head. From 1864 to 1871, the firm of Dabney, Morgan & Company accepted Morgan as a member. In 1871, he entered the firm of Drexel, Morgan & Company, in which he was associated with Anthony J. Drexel, of Philadelphia, upon whose death in 1893 he became senior partner. In 1895 the firm became J. P. Morgan & Co. Closely associated with Drexel & Co. of Philadelphia, Morgan, Harjes & Co. (successors to Drexel, Harjes & Co.) of Paris, and, Morgan, Grenfell & Co. (before 1910 J. S. Morgan & Co.) of London. J. P. Morgan & Co. became one of the most powerful banking houses in the world. Its accomplishments were numerous. J. P. Morgan & Co. financed the formation of the United States Steel Corporation, which took over the business of Andrew Carnegie and others and was the world's first billion-dollar corporation. J.P. Morgan & Co. incorporated in 1940[1]. In 1912, the Pujo Committee, a subcommittee of the House Banking and Currency committee, found that the partners of J.P. Morgan & Co. along with the directors of First National and National City Bank (the triple alliance of interlocking directorates dominated by Morgan) controlled aggregate resources of $22,245,000,000. Louis Brandeis, the former U.S. Supreme Court Justice, compared this sum to the value of all the property in the twenty-two states west of the Mississippi River (which excluded Alaska and Hawaii). In 1891 Morgan arranged the merger of Edison General Electric and Thomson-Houston Electric Company to form General Electric. In 1895, J. P. Morgan & Co. supplied the United States government with $62 million in gold to float a bond issue and restore the treasury surplus of $100 million. In 1902, J. P. Morgan & Co. purchased the Leyland line of Atlantic steamships and other British lines, creating an Atlantic shipping combine, the International Mercantile Marine Company, which eventually became the owner of White Star Line, builder and operator of RMS Titanic. In addition, J P Morgan & Co (or the banking houses which it succeeded) reorganised a large number of railroads between 1869 and 1899.