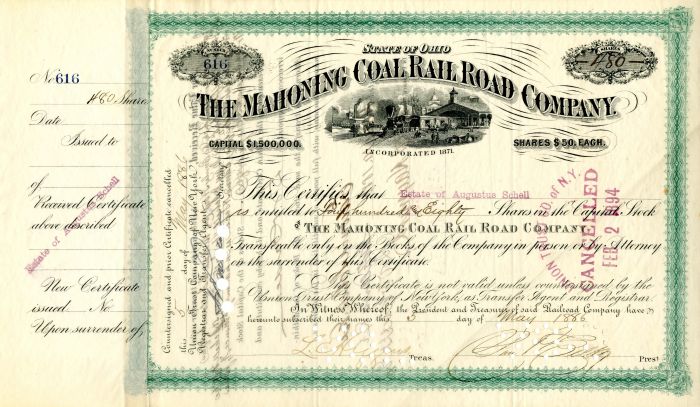 Stock issued to the Estate of Augustus Schell. Rare! Nice!

Augustus Schell (1812-1884), Lawyer and Financier. He became expert in the expanding field of corporation law. He was an intimate friend of Commodore Cornelius Vanderbilt, a Director of the Harlem RR in 1872 and of the Hudson River RR in 1874, and later of the Lake Shore and Michigan Southern, the New York, New Haven & Hartford, the Chicago and Northwestern, the Union Pacific, and the Canada Southern Railroads, as well as the Union Trust Co., the Western Union Telegraph Co., and the Manhattan Life Insurance Co. Together with Jay Gould, he engineered the corner in Chicago and Northwestern stock, one of Wall Street's notable post-Civil War episodes. At his death, he was worth several million.