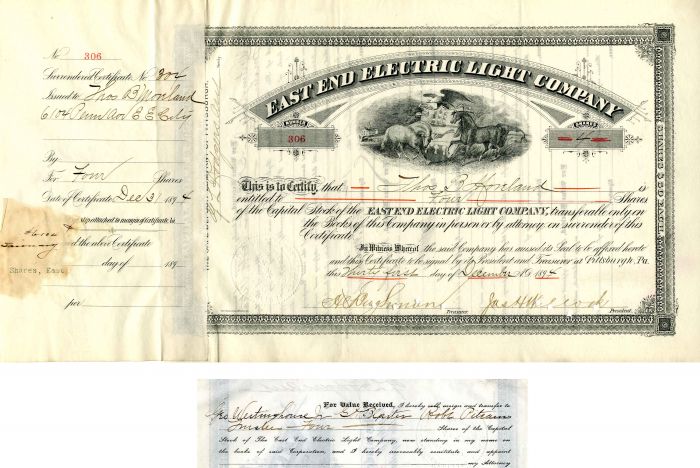 Stock transferred to Geo. Westinghouse, Jr. (October 6, 1846  March 12, 1914) was an American entrepreneur and engineer who invented the railway air brake and was a pioneer of the electrical industry. Westinghouse was one of Thomas Edison's main rivals in the early implementation of the American electricity system. Westinghouse's system ultimately prevailed over Edison's insistence on direct current. In 1911, Westinghouse received the AIEE's Edison Medal "For meritorious achievement in connection with the development of the alternating current system.

He was born in Central Bridge, NY in 1846. He was the son of a machine shop owner and was talented at machinery and business. At the age of 15, as the Civil War broke out, he enlisted in the New York National Guard until his parents urged him to return home. Two years later in 1863, he persuaded his parents to allow him to re-enlist and joined the N.Y. Cavalry. In Dec. 1864 he resigned from the Army to join the Navy, serving as Acting Third Assistant Engineer on the USS Muscoota through the end of the war. In 1865 he returned to his family in Schenectady and enrolled at nearby Union College. However, he lost interest in the curriculum and dropped out in his first term there.

Westinghouse was 19 years old when he created his first invention, the rotary steam engine. He also devised the Westinghouse Farm Engine. At age 21 he invented a "car replacer", a device to guide derailed railroad cars back onto the tracks, and a reversible frog, a device used with a railroad switch to guide trains onto one of two tracks.

In 1867, Westinghouse met and soon married Marguerite Erskine Walker. In their nearly forty-seven years of marriage they had one son, George Westinghouse 3rd.The couple made their first home in Pittsburgh, Pennsylvania. They later acquired houses in Lenox, Massachusetts and in Washington, District of Columbia. Mrs. Westinghouse died only a few months after her husband.

In 1869, at age 22, he invented a railroad braking system using compressed air. The Westinghouse system used a compressor on the locomotive, a reservoir and a special valve on each car, and a single pipe running the length of the train (with flexible connections) which both refilled the reservoirs and controlled the brakes, applying and releasing the brakes on all cars simultaneously. It is a failsafe system, in that any rupture or disconnection in the train pipe will apply the brakes throughout the train. It was patented by Westinghouse on October 28, 1873. The Westinghouse Air Brake Company was subsequently organized to manufacture and sell Westinghouse's invention. It was in time nearly universally adopted. Modern trains use brakes in various forms based on this design. The same conceptual design of fail-safe air brake is also found on heavy trucks.

Westinghouse pursued many improvements in railway signals and in 1881 he founded the Union Switch and Signal Company to manufacture his signaling and switching inventions.

Westinghouse remained a captain of American industry until 1907, when a financial panic led to his resignation from control of the Westinghouse company. By 1911, he was no longer active in business, and his health was in decline.