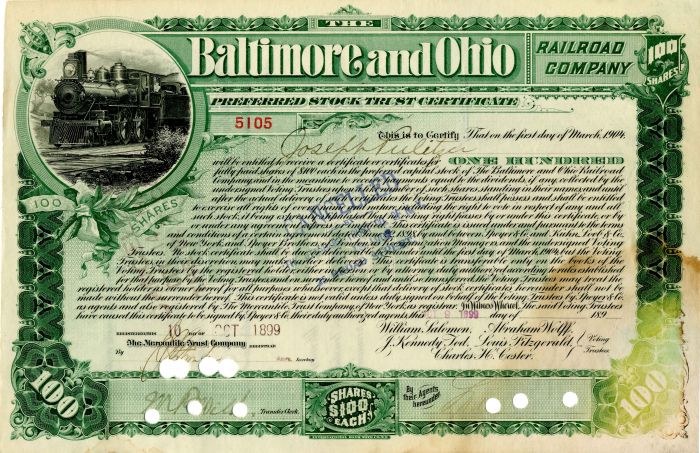 Stock issued to, not signed by Joseph Pulitzer. Joseph John Pulitzer, Hungarian: born József Pulitzer ( April 10, 1847  October 29, 1911) was a newspaper publisher of the St. Louis Post-Dispatch and the New York World. He became a leading national figure in the Democratic Party and was elected congressman from New York. He crusaded against big business and corruption, and helped keep the Statue of Liberty in New York.

In the 1890s the fierce competition between his World and William Randolph Hearst's New York Journal caused both to develop the techniques of yellow journalism, which won over readers with sensationalism, sex, crime and graphic horrors. The wide appeal reached a million copies a day and opened the way to mass-circulation newspapers that depended on advertising revenue (rather than cover price or political party subsidies) and appealed to readers with multiple forms of news, gossip, entertainment and advertising.

Today, his name is best known for the Pulitzer Prizes, which were established in 1917 as a result of his endowment to Columbia University. The prizes are given annually to recognize and reward excellence in American journalism, photography, literature, history, poetry, music and drama. Pulitzer founded the Columbia School of Journalism by his philanthropic bequest; it opened in 1912. Some staining.