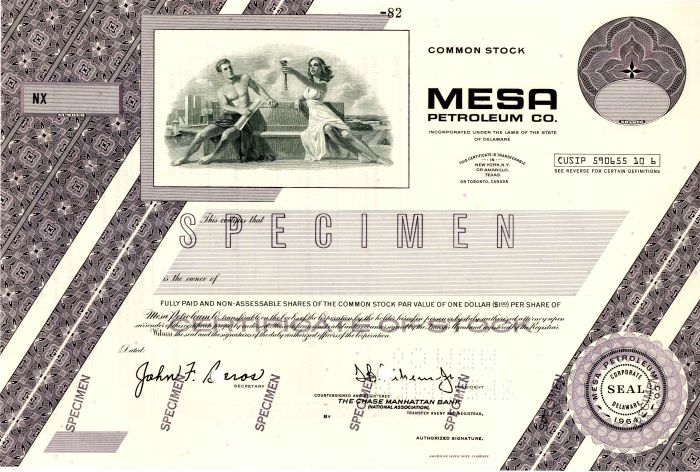 Until the Unocal decision in 1985, the Delaware courts had applied the business judgment rule, when appropriate, to takeover defenses, mergers, and sales.

In Unocal, the Court held that a board of directors may only try to prevent a take-over where it can be shown that there was a threat to corporate policy and the defensive measure adopted was proportional and reasonable given the nature of the threat.

This requirement has become known as the Unocal test for board of directors (as later modified in Unitrin, Inc. v. American General Corp., which required the tactics to be "coercive" or "preclusive" before the court would step in).

Mesa Petroleum had made a front-end loaded two-tiered hostile bid for Unocal Corporation in which the front end was $54 in cash, and the back end of the deal was $54 in junk bonds. Because most shareholders would prefer to receive the cash instead of the bonds, shareholders were expected to tender their shares into the deal, even if they did not think $54 was a fair price. If a shareholder declined to tender, that shareholder risked being cashed-out for $54 in risky debt instruments instead of cash.

The trial court found that this selective exchange offer was not legally permissible, and issued a preliminary injunction against the use of the self-tender offer defense.

It found that the Unocal's board of directors had reasonable grounds for believing that a danger to corporate policy or effectiveness existed and that the response was reasonable in relation to the threat posed. This reasonable relation analysis permitted an analysis of the price, nature, and timing of the offer as well as the impact on shareholders, creditors, customers, employees, and the community. Note that this permission to consider other constituencies besides the shareholders was curtailed in Revlon v. MacAndrews.

The Unocal test the court established in this case to determine whether directors may try to prevent a take-over is a two pronged test. The two prongs include:

The significance of the opinion flows from the court's premise that, due to the inherent conflict of interest involved, takeover defenses pose a significant danger to shareholders. In essence, the Unocal court feared that a board may use takeover defenses to impermissibly prevent threats to corporate policy or to the board's control over the corporation. As a result, there was a need for "an enhanced duty" on the board, so as to ensure that their decisions in this area were meant only to further the welfare of the corporation and its shareholders. Therefore, the court ruled that in order for the board to be allotted the protection of the business judgment rule, the board must demonstrate that it was responding to a legitimate threat to corporate policy and effectiveness, and that its actions were "reasonable in relation to the threat posed."