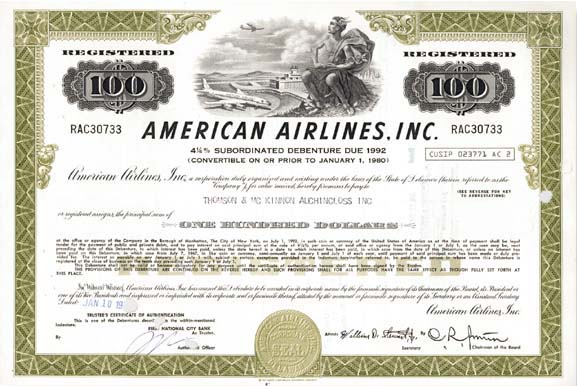 Years: 1970's
Color: Ol, Br, Red, or Aqua
Aviation Bond. Various Denominations. Vignette of male figure looking down on an airport with a jet liner flying by plus an American Airlines jet liner. Nice! American Airlines, Inc. (AA) is a major United States airline headquartered in Fort Worth, Texas, within the Dallas-Fort Worth metroplex. It is the world's largest airline when measured by fleet size, revenue, scheduled passengers carried, scheduled passenger-kilometers flown, and number of destinations served. American, together with its regional partners, operates an extensive international and domestic network with an average of nearly 6,700 flights per day to nearly 350 destinations in more than 50 countries. American Airlines is a founding member of Oneworld alliance, the third largest airline alliance in the world. Regional service is operated by independent and subsidiary carriers under the brand name American Eagle. American operates out of ten hubs, with Dallas/Fort Worth being its largest; handling 51.1 million passengers annually with an average of 140,000 passengers daily. American operates its primary maintenance base in Tulsa in addition to the maintenance locations located at its hubs. As of 2017, the company employs over 122,000 people. Through the airline's parent company, American Airlines Group, it is publicly traded under NASDAQ: AAL with a market capitalization of about $25 billion as of 2017, and included in the S&P 500 index. Available in Olive, Brown, Red or Aqua. Please specify color.