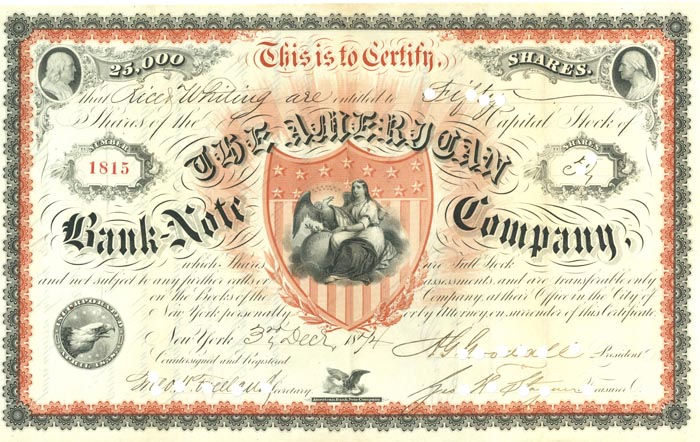 This stock certificate represents the most important Bank Note company in history. Signed as president by Albert Gallatin Goodall, a bank-note engraver, born in Montgomery, Alabama, 31 October, 1826; died in New York City, 19 February, 1887. His mother, having been left a widow in straitened circumstances, removed with her family to the Creek reservation in Alabama, and engaged in farming, but was driven out with the other settlers in 1836 by the Indians. She then immigrated to Galveston, Texas, and died the year following. When fifteen years of age, young Goodall entered the Texan navy as a midshipman, remaining three years, and seeing active service during the war between Mexico and Texas.

In November 1844, he went to Havana, Cuba, and about a year afterward began to learn copper-plate engraving. He removed to Philadelphia in 1848, became acquainted with Jacob Perkins's method of engraving on steel, and, coming to New York, connected himself with the firm from which was afterward organized the American bank-note company, of which he was during the last twelve years of his life the president. In 1858 he went to Europe on a business mission, visiting Greece, Turkey, Russia, Norway, and Sweden, then and during subsequent visits obtaining all the foreign orders executed by the company.

The Greek bank notes were the first foreign notes engraved on steel, those ordered by the czar coming next in order. Besides his European contracts Mr. Goodall secured several large orders from the South American states. He was presented in 1860 by Alexander II of Russia with a costly seal ring set in diamonds, and in 18'79 was made "knight commander" of the "Order of the Rose" by the emperor of Brazil. In 1860 he went to St. Petersburg in charge of five American engravers, to execute an order obtained by him the year previous, and to instruct Russian engravers in American methods. Besides being skillful with the burin, Mr. Goodall was a proficient linguist, and the masonic fraternity, of which he was an active member, was indebted to him for the translation of the proceedings of various foreign lodges. (From FamousAmericans.net)

The American Bank Note Company conducts one of the most famous industries of the country, and one that has won the respect and admiration of the world for America's artists and skilled mechanics. Its renown has been the result of a rare combination of the highest artistic and mechanical skill through a long experience, and its standing to-day is unequalled. The business was founded in 1795; incorporated under the laws of the State of New York in 1858; and enlarged and re-organized in 1879. The early and widespread use of paper money rendered it imperative to produce engraved work, which could not be counterfeited. The best artists competed in making designs, skillful chemists devised inks to be brilliant and ineradicable. Inventors applied the principles of mechanics to intricate geometrical engraving. The consolidation of these interests as the American Bank Note Company united the resources and reputation, the safe-guards and facilities, of a century's experience, with abundant capital to test new inventions and acquire new processes.

The company has prepared securities to the value of millions and millions of dollars, and bank-notes innumerable, also postage-stamps, bonds, stocks, diplomas, drafts, etc., not only for the Government and financial institutions of the United States, but also for Canada and the West Indies, Costa Rica, Nicaragua, Salvador, Colombia, Ecuador, Peru, Bolivia, the Argentine Republic, Uruguay, Brazil, Russia, Greece, Italy, Spain, England, Sweden, Switzerland, and Japan. Besides its steel-plate engraving, the American Bank Note Company has executed for railroads and various corporations many of the most notable specimens of letter-press printing, in black and in colors. Special styles and grades of paper, suitable for securities, are manufactured exclusively for the use of the company. There is a department of lithographing, and also a department of type-printing, entirely distinct from that of engraving, in which those two important branches of the company's business are conducted.

Special attention is paid to making railway-tickets, and the establishment is equipped to produce every variety of numbered or unnumbered tickets, in the improved styles. In its ticket-department are many of the most ingenious machines known in the printing industry. The company built and owns, at 78 to 86 Trinity Place, close by Trinity Church, its commodious and attractive fire-proof establishment, extending through to the next street, covering ten city lots. The buildings are of brick and iron, and are seven to nine stories in height. They overlook Trinity Churchyard, which gives to the windows a view of a busy section of Broadway. This position also assures to the company an unobstructed light for all time, and makes the location especially valuable. The general offices of the company, which occupy the entire second floor of the Trinity-Place front of the building, are exceptionally exquisite and most conveniently arranged. Entrance thereto is had through a large foyer at the northern end, from which leads a massive stairway.

The building is thoroughly fire-proof, and has numerous fire-proof vaults. Its equipment of machinery is elaborate, complete and costly. The whole establishment is the most elegant and extensive of its class in the world. The present officers and trustees of the American Bank Note Company are James Macdonough, President; Augustus D. Shepard and Touro Robertson, Vice-Presidents; Theodore H. Freeland, Secretary and Treasurer; John E. Currier, Assistant-Secretary; J. K. Myers, Assistant Treasurer; P. C. Lounsbury, W. J. Arkell, T. H. Porter, E. C. Converse, Jos. S. Stout, James B. Ford, Elliott F. Shepard. The officers have been connected with the business represented thirty and forty years, and have had the principal direction of its affairs during all this period. Besides its New-York establishment, the American Bank Note Company has branches in Boston and Philadelphia.

A corporation formed under the laws of New York in 1858 and reorganized in 1879. Its business is the engraving and printing of bank notes, bonds, and stock certificates. etc. It has a large plant in New York, and branch establishments in Philadelphia, Boston and Ottawa, Canada.

The company pays quarterly dividends in March, June, September and December in 1900, 1901 and 1902 the dividends were 6 per cent. per annum.

The company has no funded debt.

The American Bank Note Company was a major worldwide engraver of national currency and postage stamps. Currently it engraves and prints stock and bond certificates. It is based in Fort Lee, New Jersey.

Robert Scot, the first official engraver of the young U.S. Mint, began the company that would eventually grow into the nations premier high security engraving and printing firm, the American Bank Note Company.

Founded in 1795 as Murray, Draper, Fairman & Company (after Scot's three partners), the company prospered as the young United States population expanded and financial institutions blossomed. Its products included superior quality stock and bond certificates, paper currency for the nations thousands of state-chartered banks, postage stamps (from 1879 to 1894[1]), and a wide variety of other engraved and printed items.

To be close to the stock exchanges, brokerage firms, and banks in lower Manhattan, the American Bank Note Company established its New York City headquarters in the Merchants Exchange Building at 55 Wall Street. The company moved its office and plant to 142 Broadway (at the corner of Liberty Street) in 1867, to another new facility at 7886 Trinity Place in 1882, and again to 70 Broad Street in 1908.

The first paper currency was circulated by the US Treasury Department following the outbreak of the Civil War. Congress passed authorizing legislation for $60 million worth of these Demand Notes on July 17 and August 5, 1861. Under contract with the government, the American Bank Note Co. and the National Bank Note Co produced the novel paper money, called greenbacks by the public. A total of 7.25 million notes were produced in denominations of $5, $10, and $20. In an interesting historical sidelight, American and National were also producing paper money for the Confederacy at the same time

Following the initial production of U.S. currency by the governments Bureau of Engraving and Printing in 1862, ABNCo sought a new source of demand for its services. They found it in foreign lands. The company would eventually go on to supply security paper and bank notes to 115 foreign countries.[2]

In 1877, pursuant to a law enacted by Congress, the U. S. Bureau of Engraving and Printing became the sole producer of all United States currency. The security printing industry, finding a good deal of its work had evaporated, accordingly underwent a second major consolidation in 1879, as American absorbed the National Bank Note and Continental Bank Note companies. At the time of the merger, Continental held the contract to produce U. S. Postage stamps, and this production continued under the American aegis.

In 1887, ABNCo won the second four-year contract to engrave and print Postal notes for the U.S. post office. (New Yorks Homer Lee Bank Note Company produced these notes during the first contract period.) American assigned Thomas F. Morris, its Chief Designer, the task of re-designing this early money order. The paper for this contract (as for all Postal Notes and a massive number of official U.S. high security documents) was produced by Crane and Co. of Dalton, Massachusetts.

In 1894, ABNCo completed the final contract for the private printing of American stamps. Perhaps their most popular stamps were the one cent to $5 issues commemorating the 189293 Columbian Exposition (for which they had also printed the admission tickets) in Chicago. On July 1, 1894 American delivered its entire stamp-producing operation to the U.S. Bureau of Engraving and Printing in Washington, D.C., where U.S. stamps were still printed up into the 1990s.

In 194344 American Bank Note Company was contracted by the United States government's Bureau of Engraving and Printing to produce the Overrun Countries series stamps.

The American Bank Note Company Building was built in 1908. The company sold it in 1988. It is listed on the U.S. National Register of Historic Places and is designated a New York City Landmark.